The Breeze Airways livery: an in depth look at all the design elements

The Breeze Airways livery is one of the most unique of all the US airlines. From the pearlescent paint (which changes color in different lighting conditions), to the bold checkmark on the rear section of the fuselage, it’s like nothing else out there.

David Neeleman, the founder (and longtime veteran of the US airline industry), made it a point to brand Breeze Airways in a way which would make it stand out from all the rest. In my opinion, he succeeded magnificently.

A brief overview of the Breeze Airways livery

There are three colors used in the Breeze Airways livery (which I will explain in greater detail in a moment). They are all shades of blue. 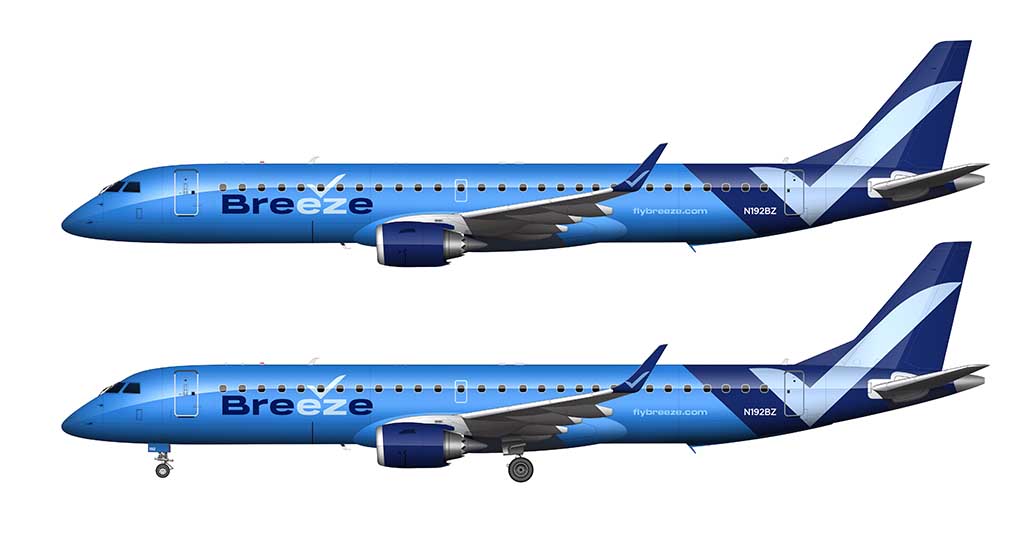 The Breeze Airways livery on my Embraer 195 template

The most interesting part about the livery, by far, is the fact that the majority of the aircraft is painted in a pearlescent coating. This gives it a very noticeable sheen in certain lighting conditions. Not only that, the color seems to shift slightly depending on how the sun is hitting the fuselage.

You’ll notice this color shift when searching for pictures of the Breeze Airways livery. Nearly every picture looks different. Some show the aircraft with what appears to be a very metallic finish, while others show what seems to be a very flat paint job. It’s all because of the pearlescent paint, and what you see is completely dependent on the lighting conditions.

The red paint in the Virgin America livery had some metallic in it, and it refracted light in a very similar manner that the Breeze Airways livery does.

The Breeze Airways logo is simple but clear – it’s very easy to get a feel for what this airline is all about by just looking at it! 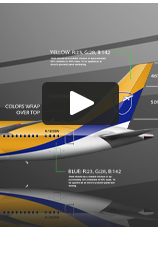 How this livery was designed

Gianfranco Beting is credited as being the lead designer for the livery of Breeze Airways. He had a team of other designers working with him, but he was the main decision-maker.

It should also be noted that Gianfranco‘s original design concepts proposed metallic paint. That was ultimately deemed to be too costly as well as to difficult to maintain, so they settled on a pearlescent mixture instead.

As I already mentioned, there are three colors in the Breeze Airways livery. All of them are blue. It’s a very bold color palette in my opinion, but not nearly as bold as the Southwest Airlines livery.

These are the colors used on all Breeze Airways aircraft:

Pros and Cons of the Breeze Airways livery

Listing of all the pros and cons of the Breeze Airways livery is entirely subjective. I know. However, as an airline livery designer myself, I can’t help but to tell you all the things that I love and hate about it. Here we go: 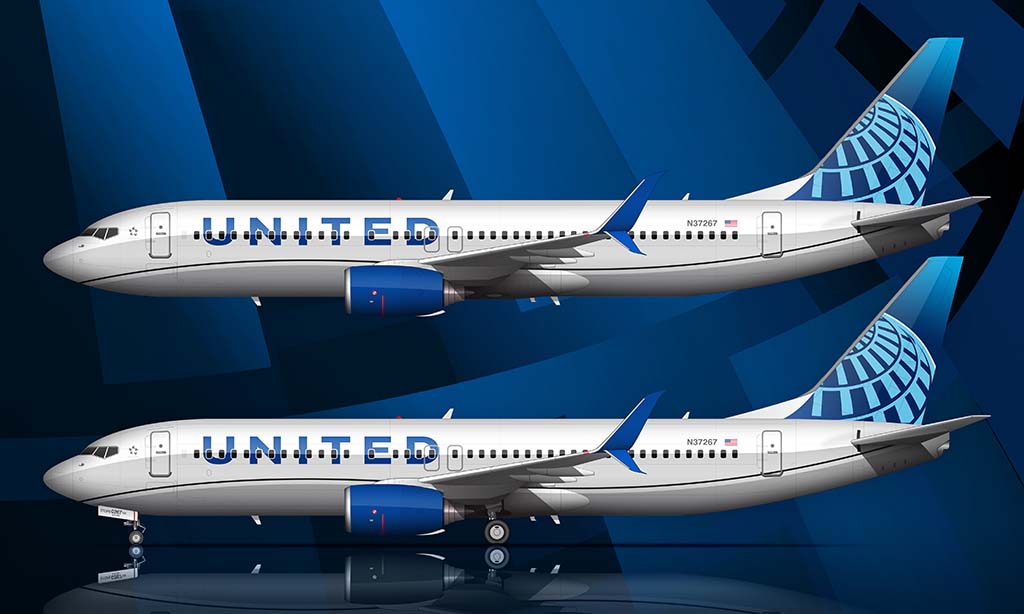 The new United livery: an in depth look at all the design elements

It’s always a pretty big deal when an all new United livery is unveiled to the world. And you know… 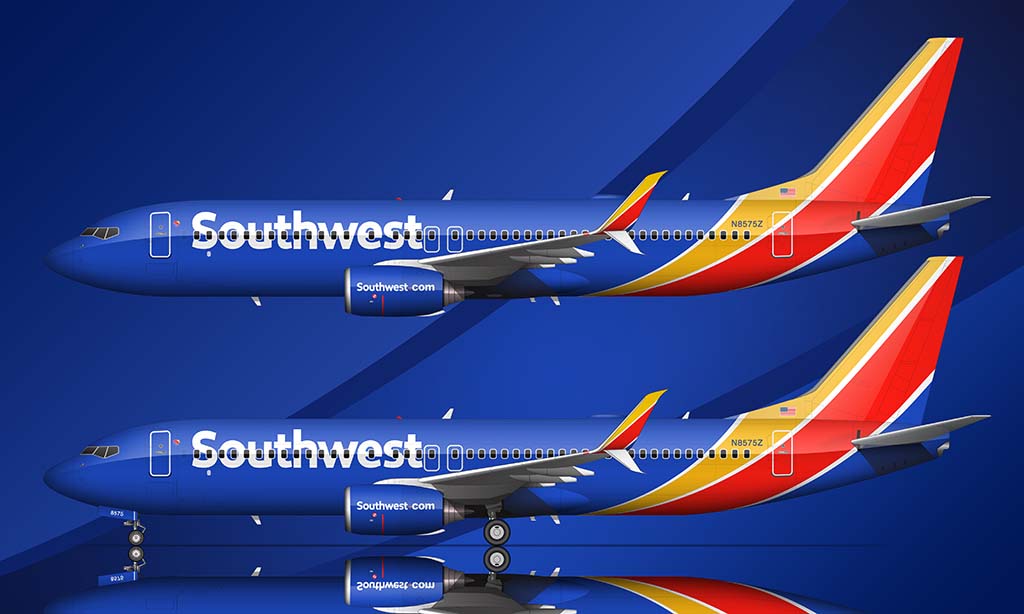 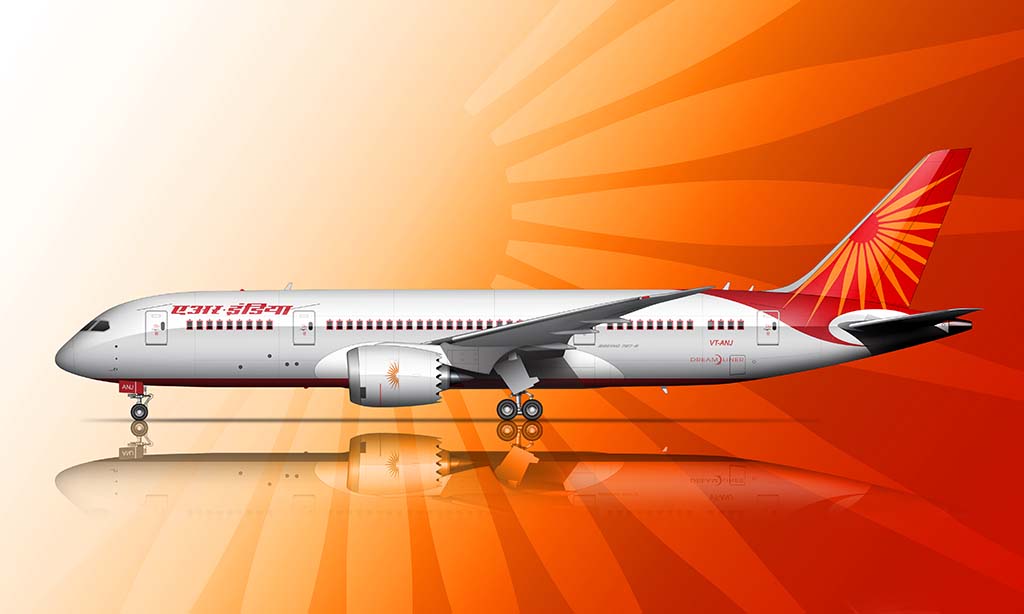