A detailed overview of every Sun Country Airlines livery (1983-present)

The history of the Sun Country Airlines livery is fascinating. It went from being the absolute worst, all the way to being the very best, and now it’s bad again.

Despite their flaws, every Sun Country livery has been bright and colorful. They’ve always zigged when everyone else zagged, and I have to give them credit for at least trying to be unique.

All the Sun Country Airlines liveries (most of them were bad)

There have been 5 different liveries for Sun Country Airlines since they initiated service way back in 1983. Actually, there have only been 3 if you don’t count the slight revisions and adjustments they made along the way. Let’s have a closer look at all of them:

The launch livery for Sun Country Airlines in 1983 is probably the worst airline livery that I have ever illustrated. It’s a three color design featuring an abstract (clip art) sun graphic near the forward section of the fuselage. 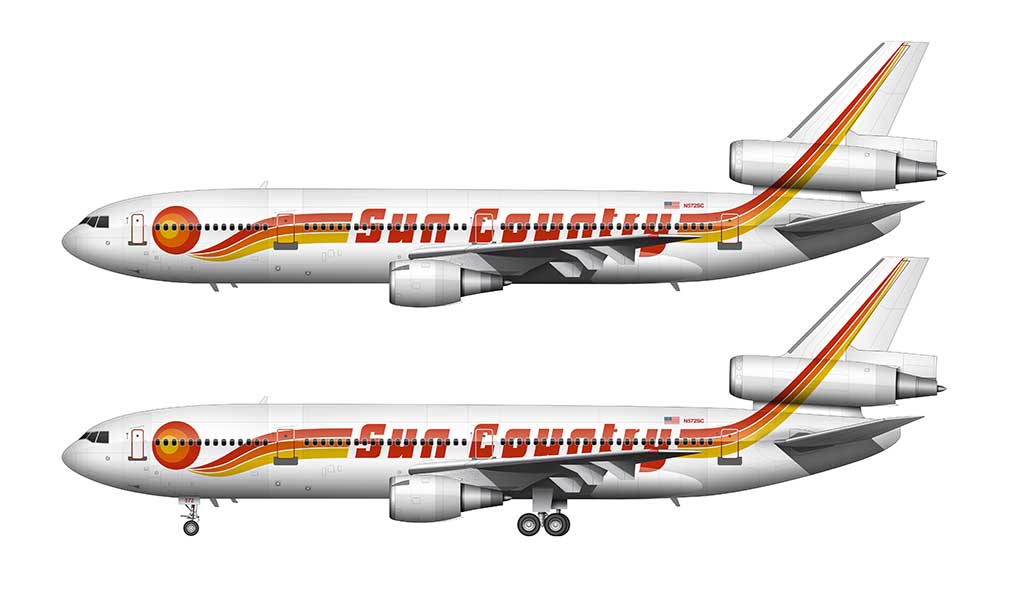 The anything but legendary 1983 Sun Country livery on the undisputedly legendary DC-10. I actually felt sorry for my DC-10 side view template as I was illustrating this.

Colored stripes flow outward from the sun graphic and extend the entire length of the fuselage and up into the vertical stabilizer. Smack dab in the middle, “Sun County” is spelled out in large red block letters. It’s horrible really.

There was a slight revision to this livery in the final few years of its existence. The most significant change was the tightening up of the Sun Country titles which eliminated the excessive spacing between the characters. Additionally, the T and the R letters were modified to look more substantial.

A slightly more subtle modification was the tightening up of the stripes that extended outwards from the sun graphic. They appeared less “lazy” in this version, with a straighter and more horizontal top edge. 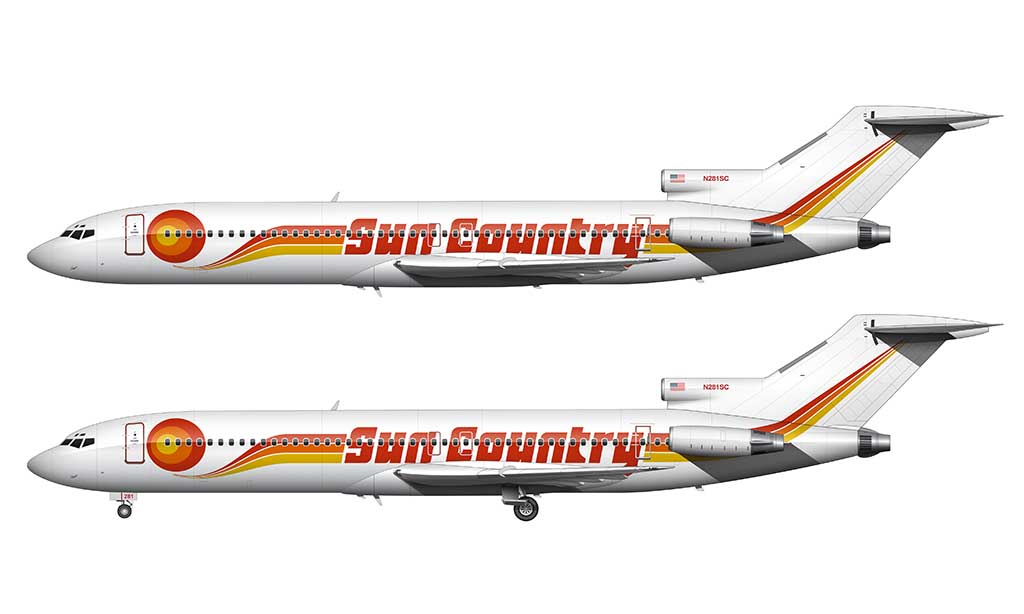 Here’s the slightly modified version of this livery (as seen on my Boeing 727-200 side view template). Notice how the forward stripes are more straight before drooping down. It was a decent improvement!

In doing my research for these illustrations, I noticed a handful of other variations of this livery:

The bottom line is that Sun Country experimented a lot with this livery over the years. They most likely knew how bad it was, and I don’t blame them for trying to fix it (any way possible).

Sun Country unveiled a much needed a redesign of their first livery in 1996. The same basic elements from the first livery were retained, and I consider it to be a very nice evolution of the brand. 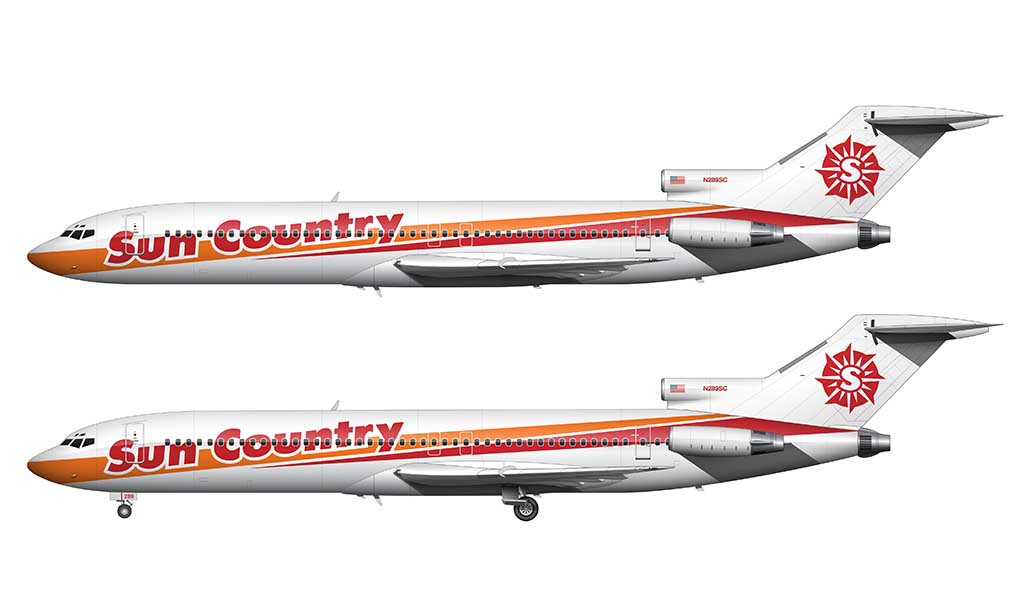 Now we’re talkin’! The second Sun Country livery wasn’t anywhere close to be deserving of any awards (other than maybe an award for not sucking as hard), but it was a solid step in the right direction.

The most significant change was how the Sun Country titles intersected the stripes. Instead of being placed between them, they became part of the stripes themselves. Other changes included:

Overall, this was a decent looking livery. My only real issue with it is how the stripes were cut off at the base of the vertical stabilizer. It would’ve been nice if they extended up into the tail like the previous livery.

Just when we all thought that Sun Country Airlines had no sense of style, they shocked the world with the unveiling of an all new livery in 2001. It was (and still is) stunning. 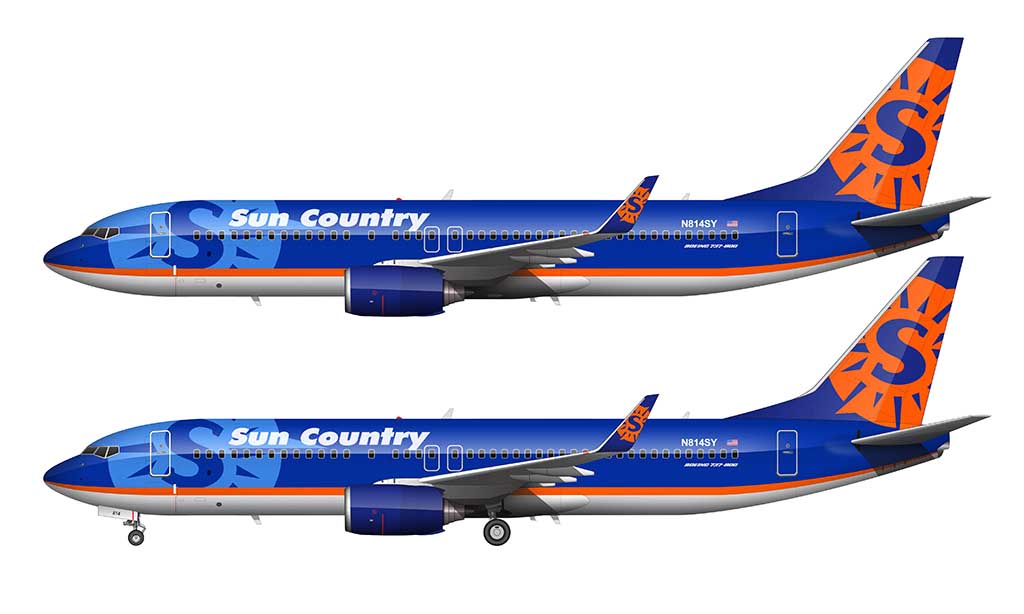 How Sun Country went from having the worst airline livery to the absolute best is a mystery to me, but I’m glad it happened. The 2001 737 livery is a perfect example of airline livery design done right.

This livery, which was created to celebrate the launch of 737 service, was way ahead of its time IMHO. 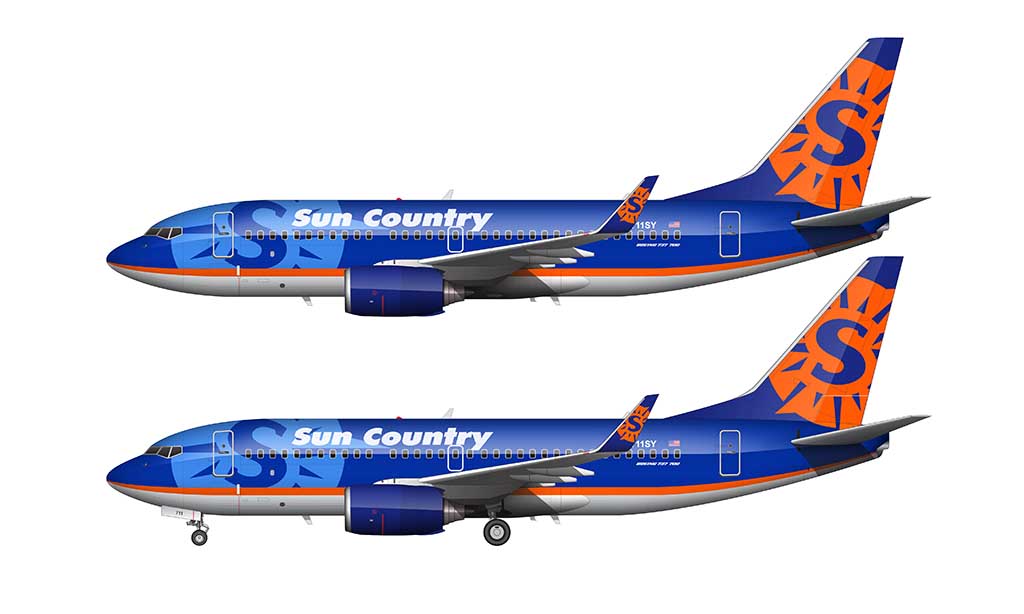 The 2001 livery looks just as awesome on my stubby little 737-700 side view template. Despite what you’ve heard, stubby can be sexy!

This was a brilliant livery. I’d even go as far as to say it was probably one of the best airline liveries of all time. I like it even more than the new Etihad livery (which is one of my all time favorites). It’s even better than the Hawaiian Airlines livery, which I consider to be nothing short of brilliant.

Unfortunately, Sun Country Airlines couldn’t leave well enough alone. In 2016, they unveiled a modified version of this livery which was much simpler and far less beautiful. And probably a lot cheaper to maintain. 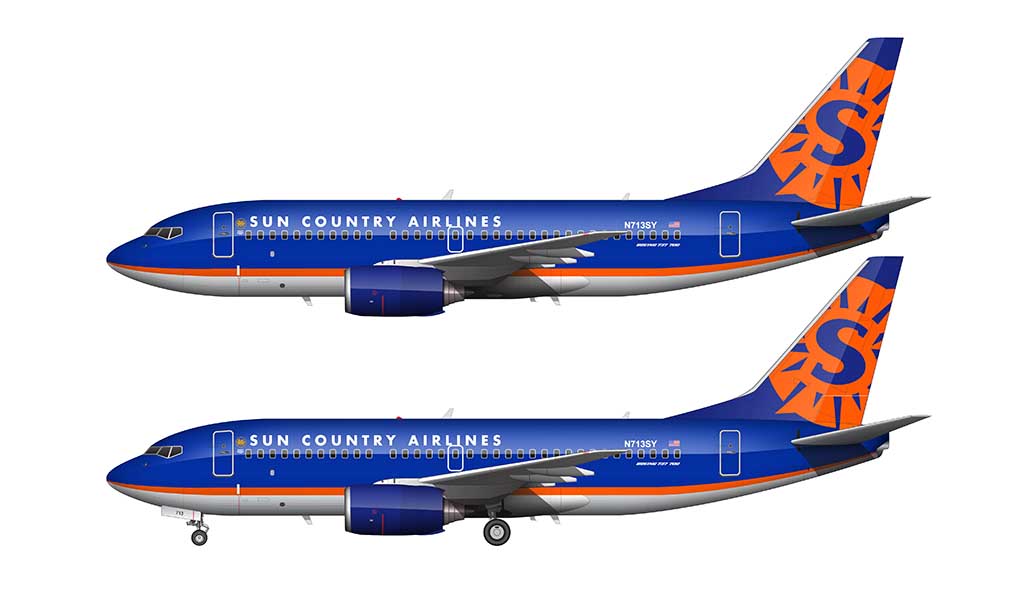 The simplified 2016 livery was a real bummer. It reminds me of what happens when a really hairy guy you’ve known for years shaves his beard for the first time and you can’t help but to wince and look away (as politely as possible). It’s awkward.

The most significant change was the elimination of the light blue watermark sundial graphic at the forward section of the fuselage. That was the best part of this livery IMHO, and it completely changed the look of the design by eliminating it.

The other significant change was to the titles. Instead of saying “Sun Country,” it was changed to “Sun Country Airlines.” A thinner typeface was used instead (in all caps).

It’s true. All good things must come to an end. in 2018, Sun Country announced that they would be switching to an ultra low cost business model. This was a significant change for the airline, which resulted in all new livery.

Instead of just coming up with one design and running with it, the Sun Country management team presented four different designs to their employees and let them choose. This was the result of that vote: 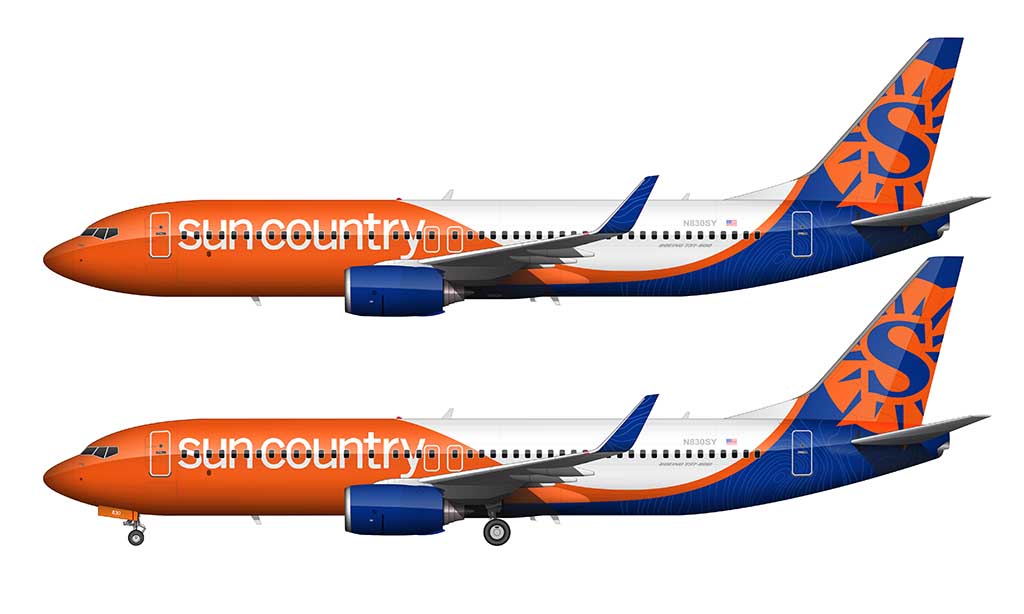 Best known in the aviation community as the “Tide Pod” livery, the 2018 redesign was…bold. Once you see that the font for the Sun Country titles doesn’t match the font in the sundial logo, you’ll never unsee it. I’m sorry.

Upon first glance, it’s actually not that bad of a livery. I like how they retained the brand colors from previous liveries, and I certainly can’t fault it for being bland and boring.

The problem is that it’s a very busy design with many inconsistent design elements: 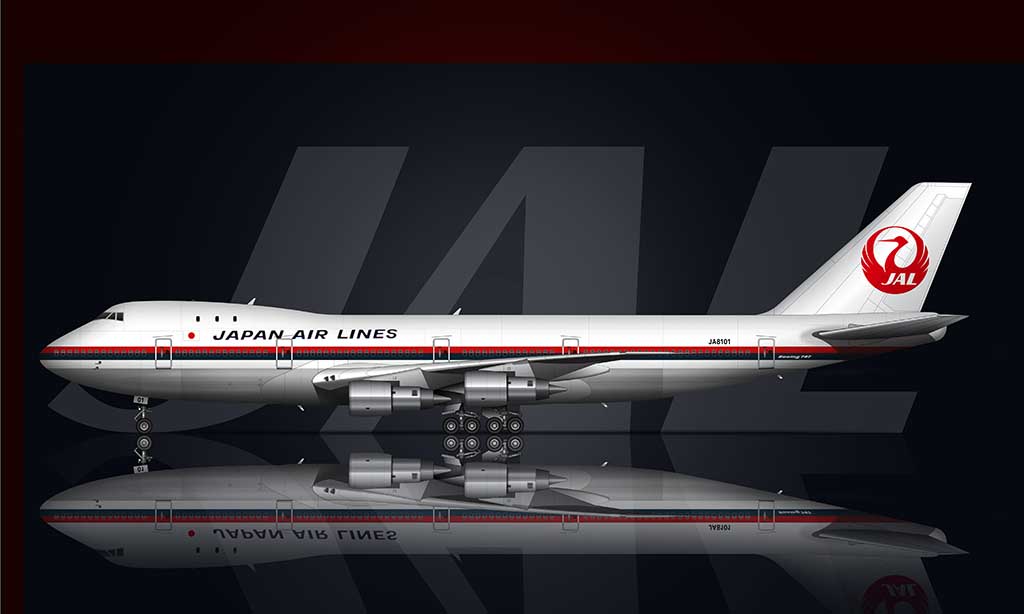 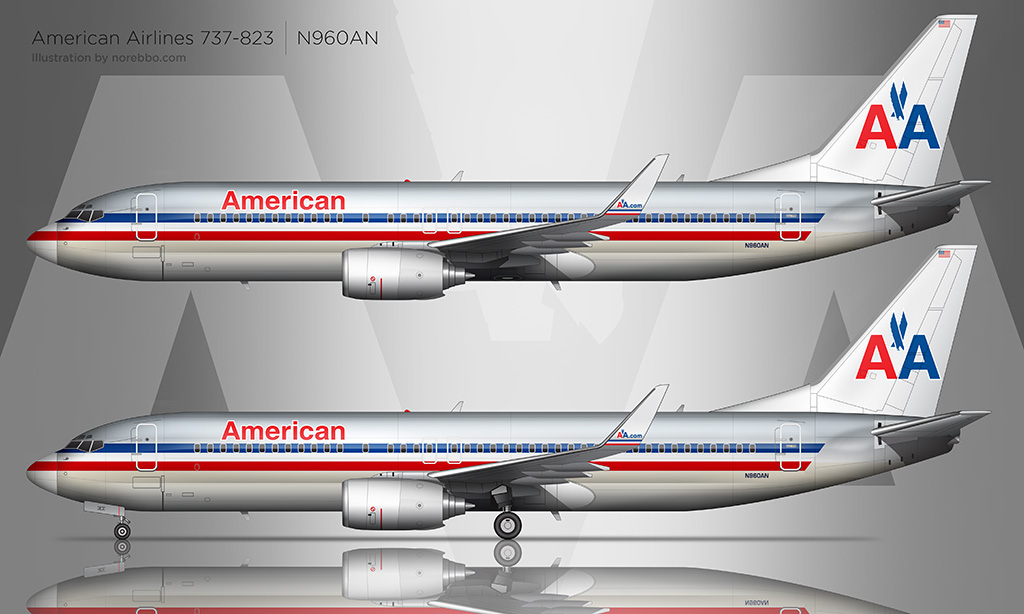 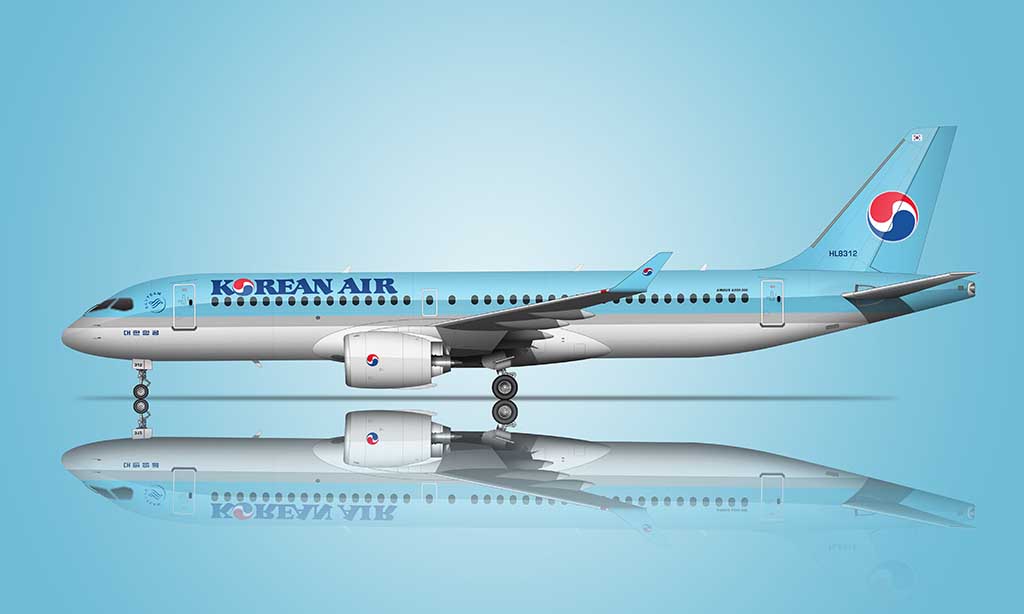