Now we’re getting to the good stuff! This post about the Boeing 737-600 marks the beginning of what will be a series of posts over the next few weeks featuring every model of the 737 family that I have not yet illustrated (all the way down to the first generation -100). Those of you who have been following me for a very long time know that I’ve been promising blank illustration templates for the entire 737 family for weeks (months perhaps?) and I couldn’t be happier to announce that I’m now ready to start posting them here to the blog and my online store.

Why did it take so long to get to this point? Well, the 737–800 was one of my very first templates that I ever created back in 2012 or so and it wasn’t anywhere near up to the level of quality that my templates are at today. That meant that my -700 and -900 versions (based off of that poorly drawn -800) had inherited the same quality control problems and all of my 737 illustrations were a total mess. In order to create very high-quality templates of the entire 737 family, I needed to start with a base illustration (the -800) that was as accurate and clean as possible. I had to start over from scratch, and that’s what I’ve been working on in solitude over the past two weeks. It was a ton of work, but it was totally worth it because those new illustrations are incredibly accurate and some of the best that I’ve ever done.

Those of you who have purchased 737 illustrations off of my online store over the past few years probably noticed a series of email notifications last weekend which alerted you to the new versions that are now available. I hope that you were all able to take advantage of the free upgrade, because all of those illustrations are brand new (rebuilt from the ground up) and much more accurate than the versions they replaced.

Keep in mind that at the time of this writing, I have not yet updated my existing 737 templates here on the blog. Only my online store has the new versions at this moment, but don’t worry – over the next few weeks I’ll be sure to update those old posts with all new templates. Pretty exciting stuff if you are a huge 737 fan like me!

Now that I’ve taken the time to explain why I’m such a slow poke, it’s time to talk about the 737-600 itself (the subject of this post). It’s an odd looking airplane, no doubt, but put it side-by-side with an Airbus A318 and it doesn’t look all that awkward. “Cute” is probably a better way to describe the proportions of this stubby little bird. 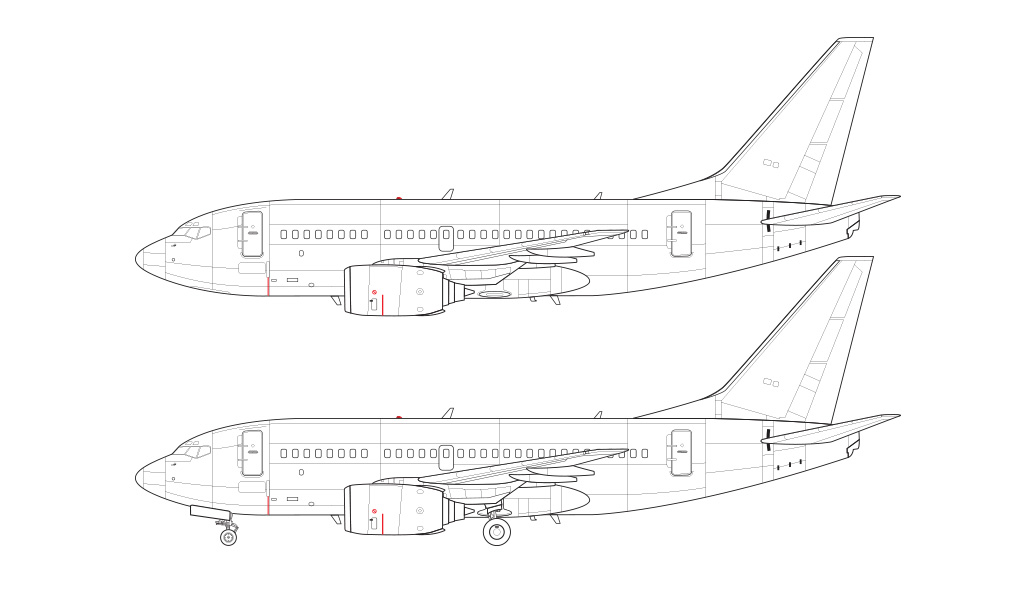 As of September 2018, there have only been 69 Boeing 737-600’s built and delivered since it’s introduction in 1998, and to be totally honest, that’s about 30 more than I expected. I’ve always considered these things to be super rare unicorns – much like how the 767-400 was built (in very low numbers) specifically for Delta and Continental back in the early 2000’s. As a matter fact, I don’t even recall ever seeing a 737-600 in real life at any time in my past – even though WestJet occasionally sends those little guys here to my home airport in San Diego every now and then to complement the regularly scheduled -700s and -800s. They aren’t easy to find!

As I said at the beginning of this post, I will be posting the rest of the 737 lineup in succession (working backwards) very soon. My goal for next week is to post templates for both the -500 and -400, so keep your mouse button finger well-rested and ready to do some clicking!