Just when you thought I had abandoned my side view airliner template project all together, I present to you all these detailed illustrations of the Boeing 737 MAX 8 (aka 737-8). It’s been nearly three months since I posted my drawings of the A340-300 and I was fully committed at the time to finish out that series with the -500, -600, and -200 variants. Unfortunately, life got in the way and here I am three months later and none of them have been finished yet. But the good news is that I have the wireframe line drawings completed for each one of those, so now it’s just a matter of creating the fully shaded white versions. Soon!

Based on the number of requests I have been getting for the next-generation 737 variants, I decided to focus on those first before I go back and finish out the A340 series. I know that many of you have been patiently waiting for the 737-8 MAX (like, foreeeeeever!), and I am really sorry that it has taken so long. I will mention, however, that part of the reason for the delay was the lack of good reference material available for this aircraft. There are only a few frames built at the moment, and not very many detailed pictures which show all the changes very well. But I pieced together what I could and I think I’ve recreated this 737-8 fairly accurately. “I think” are the key words here – so please do let me know if you spot any errors in these drawings. 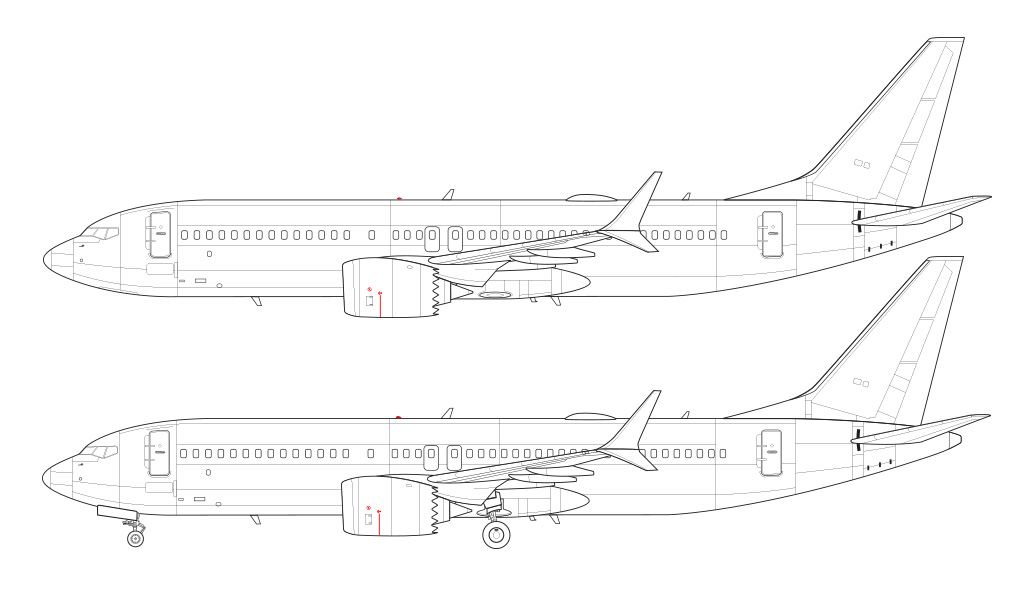 Technical side profile line drawing of a Boeing 737-8 MAX

The MAX is pretty much identical to the previous generation aircraft, except for a few bigger component upgrades: new (larger) engines, taller landing gear, a new tail cone, and a new wing with a beautiful new split scimitar winglet design. Other than that, I was able to leverage my existing 737-800 template for the fuselage and vertical stabilizer parts, along with a slew of little details that carry over to the MAX. And to be honest – once I finished out this template and stepped back to have a look, I was really amazed at how similar it is to the old 737-800. Only hardcore aviation nerds will be able to spot the differences between the MAX and previous generation 737’s, and I think Boeing missed an opportunity here to differentiate the design a bit more (which would amplify the “new and improved / cutting edge tech” aspect a bit). Of course larger changes would have meant a longer development time, so the practical side of me understands fully why they did what they did.