I’m actually kind of surprised that it took me so long to create side view templates of the Boeing 707. It’s a set of illustrations that I’ve been promising for years, and I never intended to push it off for so long.

You see, as a kid who was just starting to get interested in aviation back in the early 80’s, it was aircraft such as the DC-10, 727, and 707 which were the workhorses of the time. These were pretty much the only airplanes I could find pictures of at my elementary school library, and I spent hours trying to learn how to draw them as perfectly as I could with a dull yellow number 2 pencil. That’s right – I’ve been drawing airplanes since I was 11 years old!

The very first Norebbo aircraft template (from 1985 or so)

Anyway, despite never having the chance to fly on one, the 707 brings back a lot of childhood memories for me. The DC-10 did as well, which is why it was the first ever side view aircraft template I created way back in 2012. I finally got around to the 727 in 2018, but…I’ve been procrastinating (hard) on the 707. Until now.

Long story short, it was the sheer amount of variants (and engine options) for the 707 that scared me off. The 707 was a massive project for Boeing, and since it was their first ever jetliner, they learned a lot and were continuously improving and evolving it over the years. The first 707 that rolled off the line in 1958 was a far cry from the final one in 1978.

Where do I even begin to create a series of side view templates for the 707? To make things easy, I just threw my arms in the air in surrender and decided to tackle one of the most popular variants first: the 707-320C.

707-320C templates (with and without painted engines)

One of the most interesting things (by far) about creating these side view 707 illustrations was the fact that I couldn’t help but to replay quotes from the movie “Airplane!” over and over in my head. “I am serious. And don’t call me Shirley…” 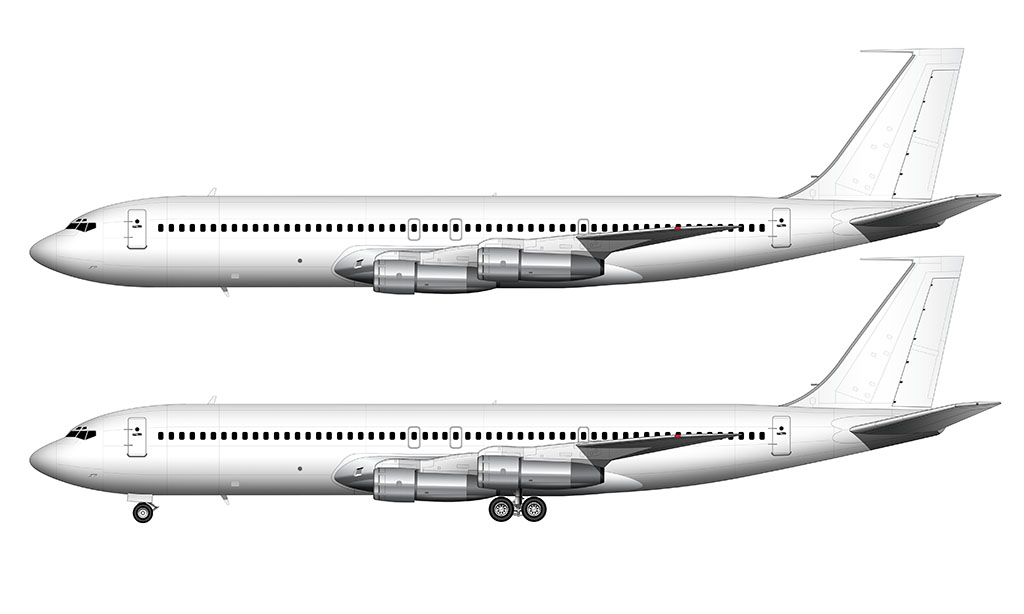 And since I realize that there are many of you out there who use my templates to create fantasy liveries of your own, I thought that it might be a good idea to create another version with painted engines. I don’t believe that I’ve ever seen a 707-320C with painted engines before, but I like way it looks. Even if heating lead-based paint to near boiling temperatures is a massive fire hazard… 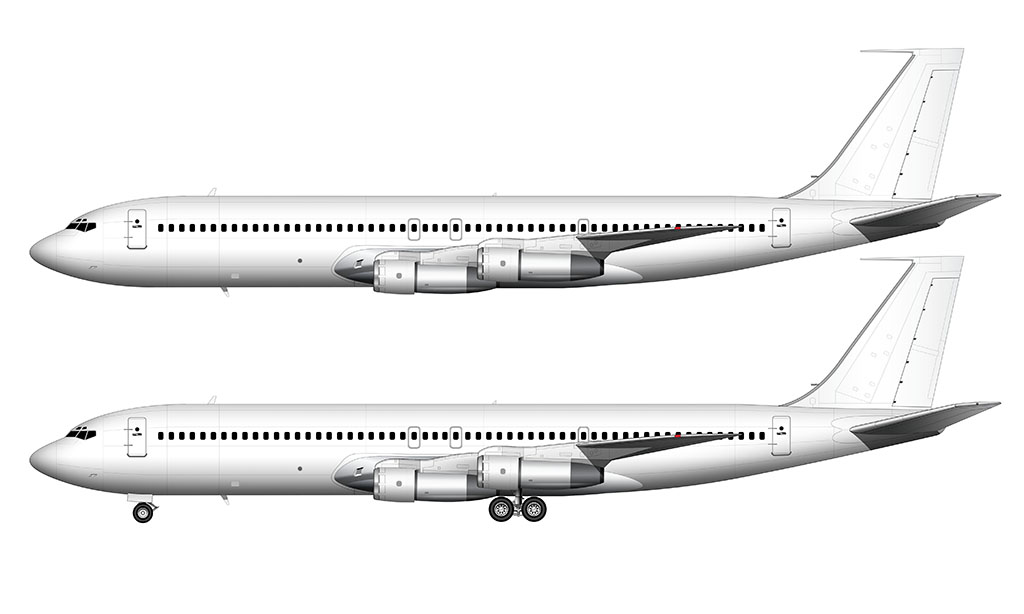 Finally, here is the line drawing version, just like I do for all of my aircraft templates: 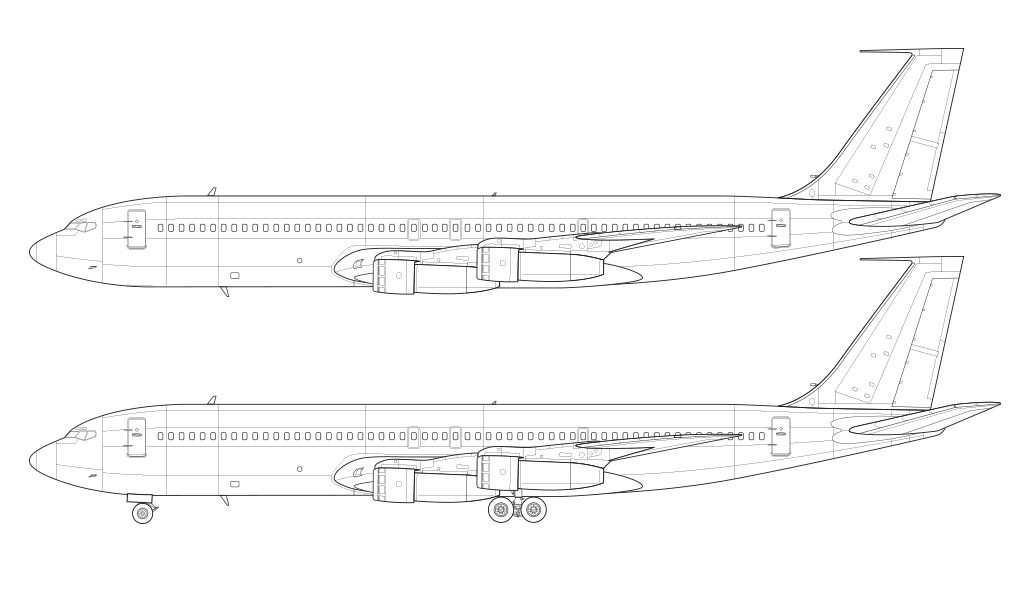 Not only do I hope that you find these temperature useful, it would bring me heaps joy and happiness if they cause you to start mouthing “Airplane!” quotes as well. Heck – even singing the lyrics of “Jet Airliner” by the Steve Miller Band would be cool as well.

Ok. So this is where my head starts hurting and I start reaching for the Tylenol. Trying to sum up the history of the 707 in a short paragraph or two is a monumental task due to the sheer amount of variants and engine options available over the years. Not only that, there were a slew of minor differences within major variants as well. As I said – the 707 was a massive learning experience for Boeing and they were continually learning and refining with each passing year.

In the most succinct way of describing the 707-320C as I can, I’ll list out of some of the major highlights:

Although the 707 series is so massive that I could easily spend the next year working on it exclusively, I’m going to move onto other things for a while. Don’t worry – I’ll circle back and continue to create other 707 variants as time goes on (which will be much easier now that I’ve got the base template drawn).

I’ve recently had some requests for the DC-9 series, so I figure maybe it’s time to do at least one of those little buggers. If you couldn’t tell already, my attention span is as short as a gnat, so doing one will be all I’ll be able to handle before moving onto something else. But – at least it’ll be the start of more to come!

Now the only problem is trying to figure out which DC-9 I want to do first. Just like the 707, there are plenty of variants to choose from…