Have you ever been so busy that you start feeling hopeless and just stop trying to keep up anymore? That’s the way I’ve been feeling about some of my side projects lately (including this blog), so I do apologize for the lack of posts recently. I’m still here – up to my eyeballs in Maya and Form Z 3D work as a matter of fact, as well as chipping away on my side view airliner template project. Trust me – there’s a lot going on even though it may not look like it! That’s the problem with being so busy unfortunately. Many people think I’m slacking because I haven’t made an appearance in a while, but the truth is that I’m probably the most productive I’ve ever been in my life. I just haven’t had the time to post anything…

I’ve got three more airliner templates I need to make over the next several months, so I figured that I’d post these 757-300 side view templates before getting started with those. I completed these illustrations about 6 weeks ago, but my lack of free time has kept me from posting these here. My apologies. I don’t think that the 757-300 is a very popular aircraft anyway – heck, I think I’ve received only 1 request for it since I started this template project so I know there are very few of you who are salivating at the mouth for it. But I needed it for another project of mine (which is starting to become a pattern, I know) so it was necessary to roll up my sleeves and stretch the 757-200 template I created two years ago. 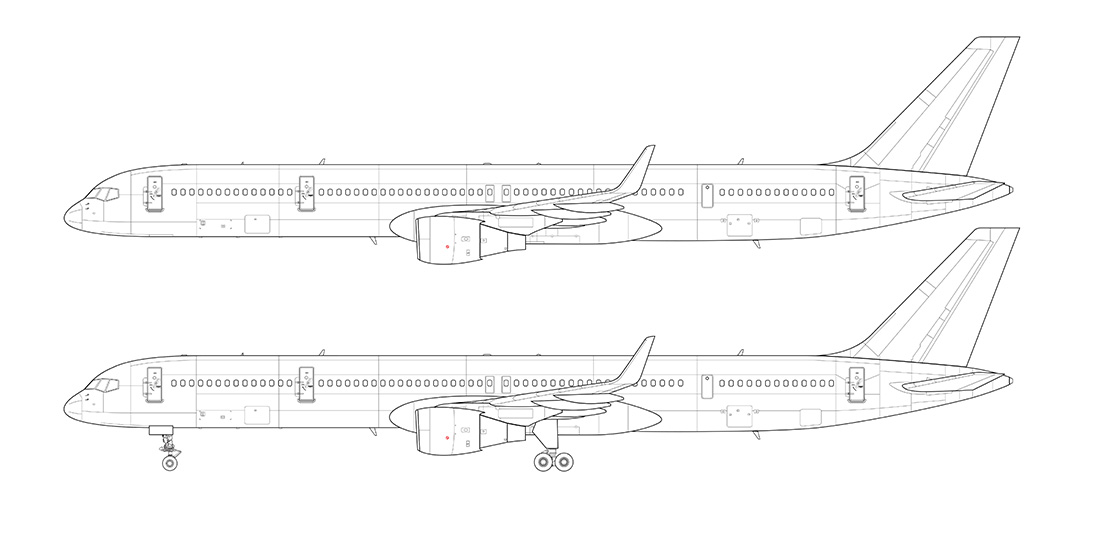 Stretching an existing template is always an uncomfortable experience for me. It may seem like the easiest thing in the world to anyone who hasn’t done it before, but once I start pushing and pulling the pixels to fit the proportions of the real airframe, I always take a step back, scratch my head, and start to wonder if I’ve made a huge mistake. Especially for oddballs like the 757-300 (and the A340-600 I just completed). The proportions of this thing are downright weird, with it’s super-long forward section and relatively stubby rear-end. I couldn’t believe that was right, even after double-checking the dimensions and making sure I didn’t make a mistake by adding one too many fuselage sections. But everything checks out – it’s an accurate template. Well, I wouldn’t build a real aircraft off of these drawings, but they’re close enough!

Apologies again for the gap in posts. And as far as the next four templates, I have to get started on those relatively soon since the completion of another project depends on them. If you want to know, those three templates are: the Boeing 717, the ATR 74, and the Cessna Grand Caravan. Time to get busy!