Okay, now I’m getting to the point where I need to start filling in the gaps in my side view airliner template collection. I’ve got a lot of the major airframes from Boeing and Airbus finished, and I figured that now is the time to start cranking away on all the different variants. This Boeing 777-300 kicks off that effort.

You already know that I’ve created templates of the 777-200 – as a matter of fact, that was one of the first airliner templates I ever created. But it turns out that the -300 variant is becoming one of Boeing’s most popular aircraft, and there are quite a few detailed illustrations of this aircraft that I’d like to do. So there was a real need to get it done, and I’m happy that it’s finished. 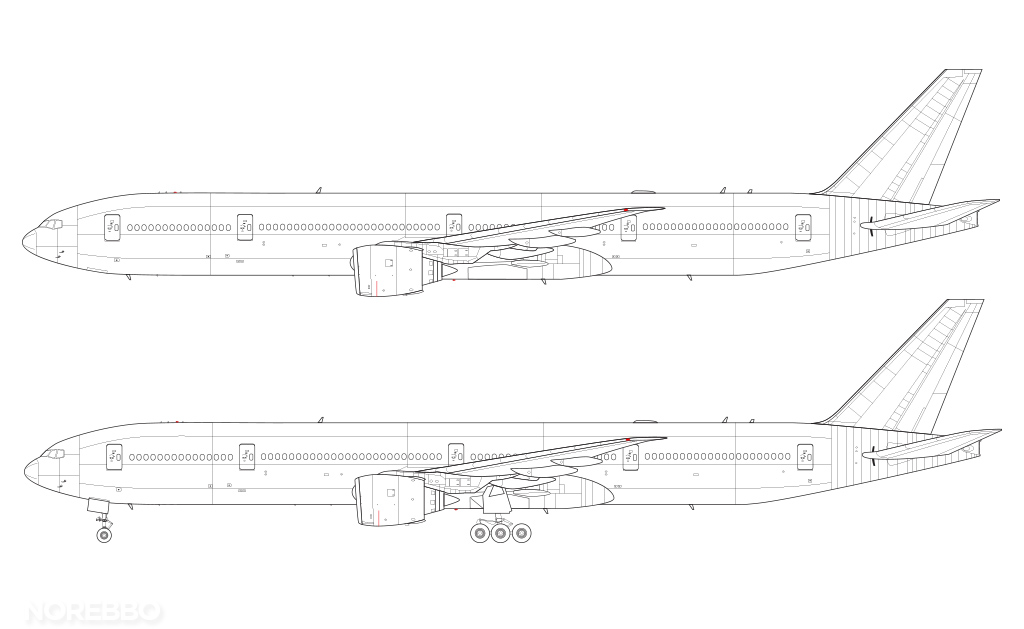 The good news is that these variants take a lot less time to do than illustrating an airplane from scratch. All I have to do is stretch the front and rear sections of my vector source files, add in some windows and different door configurations, and voila! It won’t be that easy for all aircraft though. For example, the Boeing 787-9 has a different main landing gear than the 787-8 that I already illustrated. So there will be certain things I’ll need to do here and there with some aircraft to keep these templates as accurate as possible.

This 777-300 was fairly straight forward though. It shares nearly all the same components as the -200 version, so all I had to deal with were fuselage issues. I like it when things are so easy like that, and I know from experience to enjoy it when it happens – because it’s definitely rare!

And you’ll be happy to know that I’ve already started on my next variant, which I hope to have done soon. It’s an Airbus A321, which is giving me a little bit more heartburn than this 777 did. I’ll explain my woes when I post that template set…