Say what you will about the Learjet 45, but I think it was one of the best looking business jets ever produced. It’s ultra sleek, fairly compact, and it’s got a cool “retro” vibe to it that I don’t see in other business jets from this era.

Unfortunately, the 45 didn’t have the best reputation for being a reliable aircraft. I didn’t realize this before doing the research to illustrate the templates below, and I’ll admit that it hurt to find out that one of my favorite business jets of all time was a bit of a turd.

Side view templates of the Learjet 45

One of the other things that I leaned about the Learjet 45 as I was doing these illustrations was the fact that the wing is relatively tiny compared to other modern business jets. For example, if you place these templates right next to my Gulfstream G650ER templates, the difference will be obvious. And a bit comical if I’m being honest.

Despite the tiny wing and reliability issues, I’m still as much of a fan of the Learjet 45 as I was before I began working on these illustrations. It’s a beautiful airplane (faults and all).

What exactly is a Learjet 45?

The Learjet 45 is a small, eight-seat, twin-engine, super-light aircraft built for corporate (private) use. It’s a medium-range jet with a maximum cruising speed of 460 miles per hour and can reach an altitude of 51,000 feet. Power to weight ratio is very good, giving it the ability to travel at much faster speeds than many other aircraft of this size.

Bombardier Aerospace designed and developed the Learjet 45 to replace the older Learjet 35. 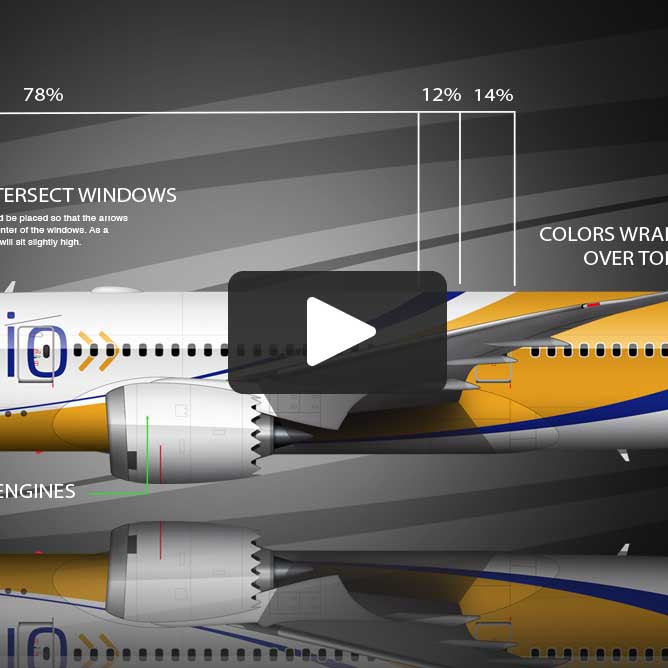 After producing the 45 for four years, Bombardier designed a slightly smaller version ideal for shorter flights. This variant became known as the Learjet 40.

The 40 and 45 are quite similar to one another. They have the same engines, control systems, and cockpit design. However, the slightly shorter fuselage the 40 results in less interior cabin space than the 45. It can fly up to seven people (compared to eight in the 45), and can operate shorter segments (such as New York to Chicago) more efficiently.

The main difference between the Learjet 45 and the Cessna Citation X (besides how they look) has to do with speed and range. Both planes have a ceiling of 51,000 feet, but the Citation X can travel at a speed of up to 525 mph, whereas the Learjet 45 can only go 460 mph.

A Citation X also has more than twice the range of a Learjet 45 (3,140 nautical miles). It takes more runway to get a Citation off the ground and to safely land than a Learjet 45, giving the 45 a bit more versatility.

You’ll pay considerably more for a crew (and a hangar) with a Citation X than you will with a Learjet 45. If you want a Citation X, expect to pay double the amount (for everything) than you would for the 45.

How much does a Learjet 45 cost?

Insurance on such a plane isn’t cheap, either. You’ll only pay approximately $3,000 for hull insurance, but liability insurance is $35,000 per year. You also have variable costs like fuel and maintenance. All told, you can expect to pay $1.17 million per year to operate a Learjet 45, assuming 300 hours of operation each year. Still – that’s a lot cheaper than a Citation X (for example).

Learjet 45s can fly 1,420 nautical miles (1,635 land miles). To put it another way, a Lear 45 can fly from JFK International Airport in New York City to Minneapolis-St. Paul, Miami, or Dallas-Fort Worth nonstop.

Compared to other business jets such as the Bombardier Global 7500 or the Citation X, that’s not a lot. This is not a business jet ideal for long-haul international travel.

Other interesting facts about the Learjet 45

Here are some other fun facts about the Learjet 45 that I uncovered during my research:

During certification testing, test pilots stalled the Learjet 45 over 3,000 times. This sort of extensive testing helped to make the Learjet 45 one of the most stable aircraft ever built.

Many aircraft will pitch forward (nose down) during a stall. They might also start to roll to one side. The Learjet 45 does not. As a result, passengers may not even feel the plane stall at all (rhyme intended). This kind of stability also makes it easier to land the plane safely at unusually low speeds.

Learjet 45s are equipped with 8 seats. However, the toilet in the lavatory can convert to a ninth legal seat if necessary. So technically, if space is tight, you may be told to sit on the toilet for the duration of the flight. How cool (and unfortunate) would that be?

Opinions have changed drastically over the last 15 years

In the early days, operators both loved and hated the Learjet 45. At the time, they appreciated its performance, payload capacity, and more. However, it was a maintenance nightmare and owners found themselves frustrated whenever they had to ground their planes due to mechanical problems.

To compound the maintenance issues, mechanics had trouble getting parts and support on time.

By 2017, these problems had largely been resolved. Opinions of the aircraft changed, and most owners came to regard the Learjet 45 as a highly reliable workhorse (often referring to it a “gas-and-go” airplane).