Here we go with detailed side view templates of the last remaining major variant of the 747 series! I say that with a slight smirk on my face however, since the 747-300 is basically just a combination of the 747-200 and 747-400 templates that I have already created. I’ll get into the specifics in a moment, but first I just want to say that it feels pretty darn good to scratch another complete aircraft series off my list.

If you haven’t already done so, I highly recommend browsing through my entire collection of side view aircraft templates (not just the 747 series). I’ve been working on this project off and on since 2012, and at the time of this writing, I’ve published a total of 118 individual illustrations. It feels like a lot more than that considering how labor-intensive these drawings are. It takes more effort than you know to get all the details right!

Anyway, enough about me and my catalog of airplane drawings. Let’s jump right into the topic of this post…

Just as I’ve mentioned (too many times) in my posts about the -100 and -200 variants, I absolutely love the “retro” style and design of these Pratt & Whitney JT9D-7 powerplants. Of course they weren’t designed to be retro – it was just the way things were done back then. But I still think they have aged perfectly and it gives the 747-300 a uniquely “classic” look. 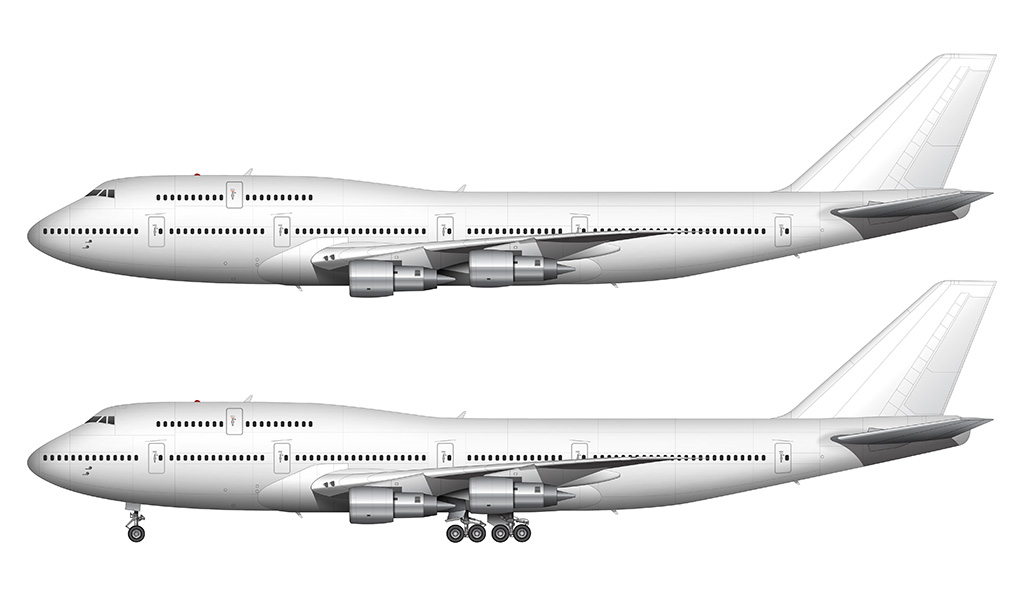 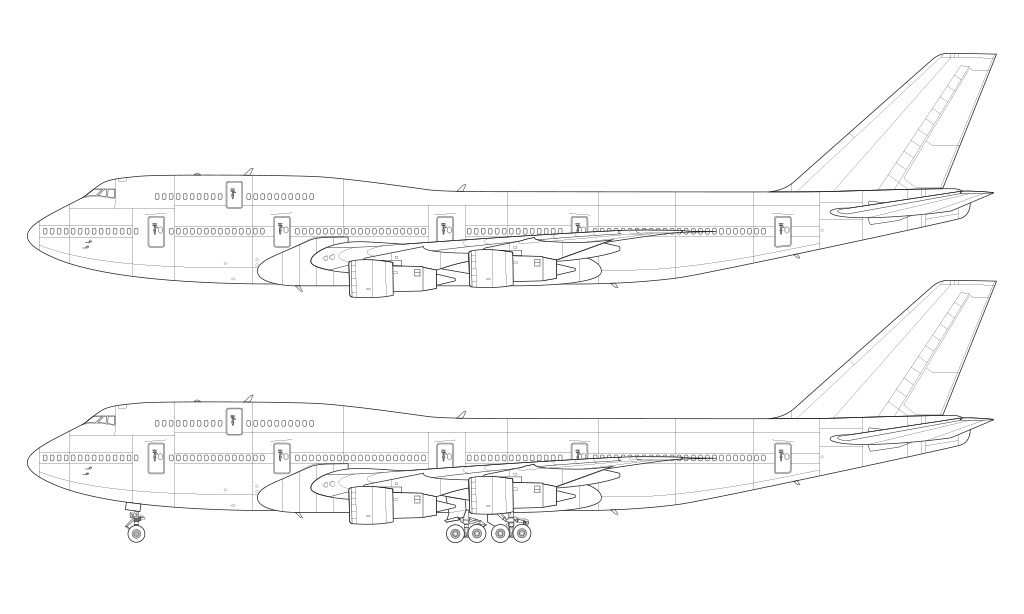 The only weird thing about seeing these old-style engines on the -300 is that…the combination is somewhat awkward. At least it feels that way to me.

You see, these Pratt & Whitney JT9D-7’s are pretty much as “retro 1960’s” as you can get. However, the shape of the fuselage (with the extended upper deck) feels incredibly modern to me still. Therefore, I can’t help but to look at this version and chuckle. Just a little.

Of the three engine variants available on this the -300, it’s this one with the Rolls Royce RB211’s that seem the most natural to me. As a matter of fact, it’s the version I think of when I think of the 747-300. 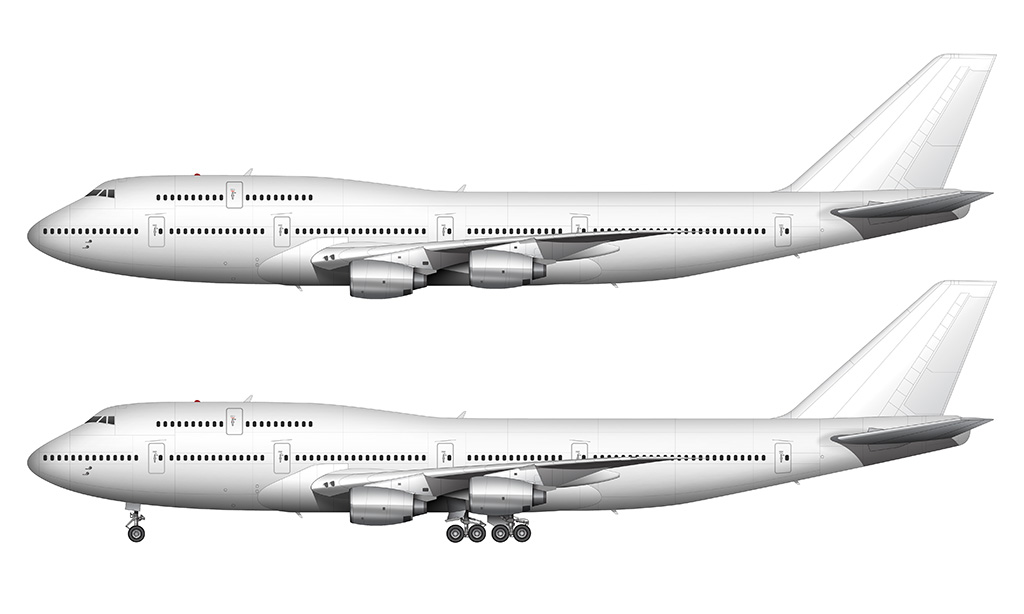 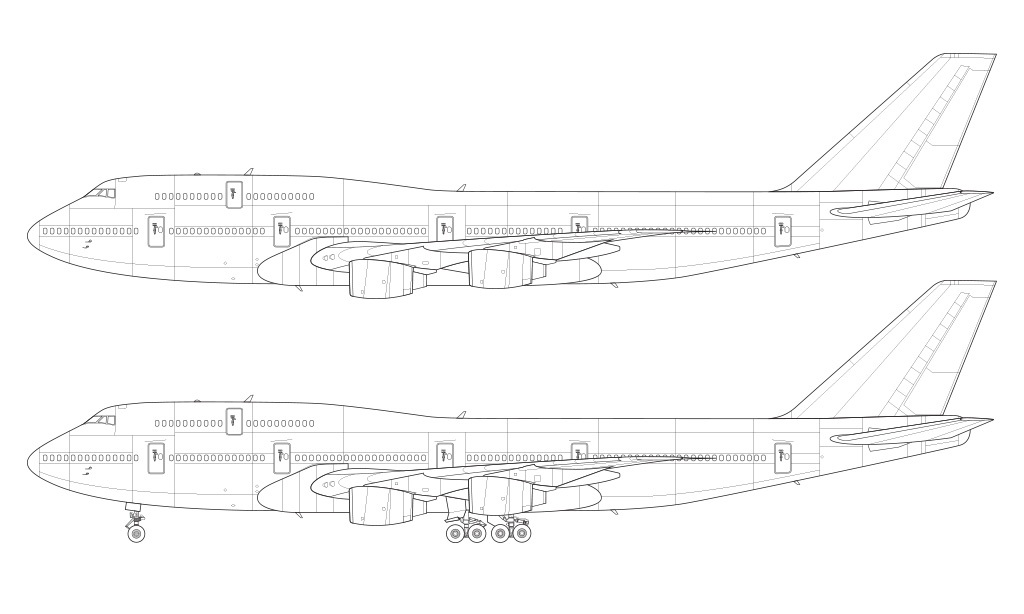 My personal opinion is that this is the least interesting-looking version of the 747-300. The Pratt & Whitney version might look a little strange (and awkward), but at least it was interesting.

It should be noted that the Pratt & Whitney and Rolls Royce engine options for the 747-300 were direct carryovers from the 747-200. These General Electric CF6’s were slightly upgraded for better performance and fuel efficiency. 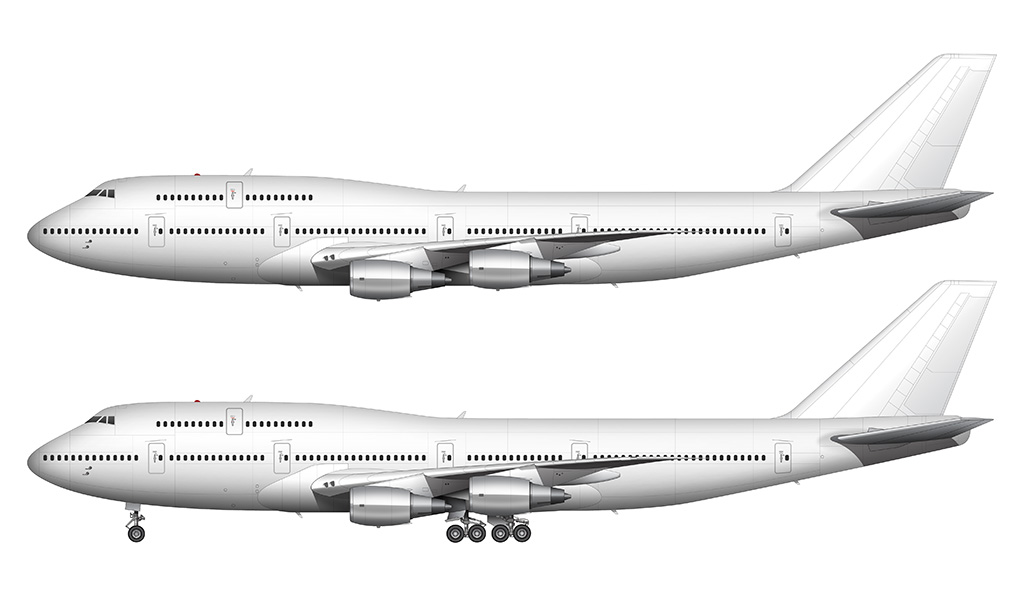 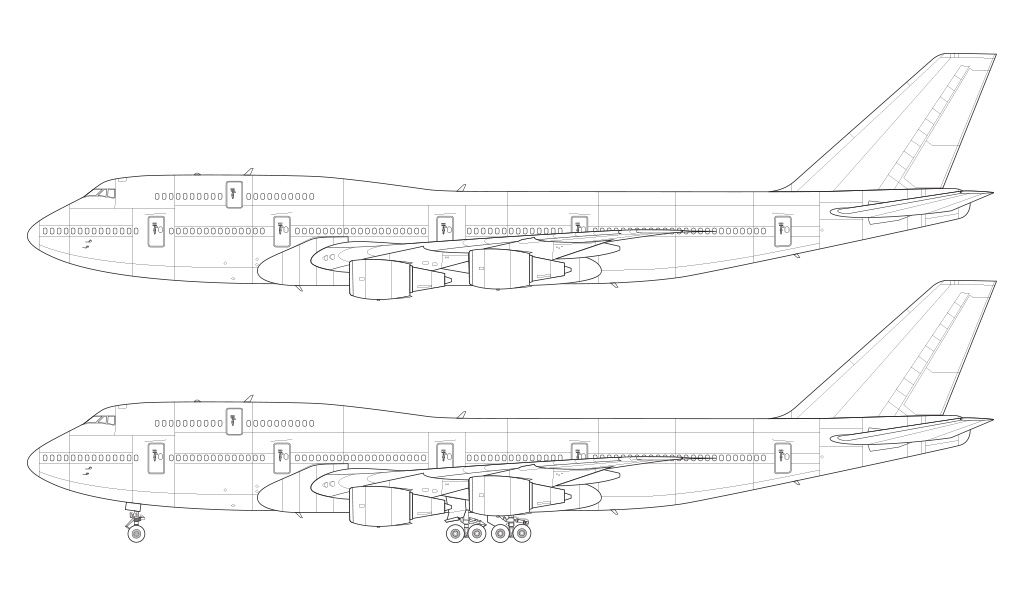 As far as I can tell, there were no significant visual differences between these new CF6-80C2B1 engines and the version prior. Nearly all of the improvements were internal.

And that’s pretty much it. The 747-300 is essentially a 747-400 above the wings, and a 747-200 below. Of course there were also a slew of internal improvements and upgrades, but I’m only concerned about the visual differences.

Now, before you tell me that there was a significant update to the 747-300 in 1987, all I want to say is: I know. I do plan on creating a template of that version, but it will require me to update my existing 747-400 templates first. I haven’t been able to get to it yet, but it’s coming.

For those that don’t know, the biggest change was with the wing design and how it connected to the fuselage. This is the same design that eventually carried over to the 747-400, which I incorrectly illustrated on my first versions of those templates. I need to go back and fix that.

There was also a “combi” version which was officially referred to as the 747-300M. This model featured a large cargo door in the aft section of the fuselage, allowing for the transport of heavy freight and passengers at the same time. There were only 21 of these built (which looked best in the KLM livery IMHO), so I didn’t figure it was worth illustrating.

What aircraft template(s) am I going to create next?

If you’re a member of my mailing list, you probably saw an email from me last week asking you for your vote on the next Norebbo aircraft template. Thanks so much to everyone who responded!

I’m happy to announce that the winner is: the Boeing 777X. As we all know, this aircraft is still in development at the time of this writing (it was just delayed further as a matter of fact), but I’ll do my best to illustrate both the 777-8 and -9 as accurately as I can.

At the same time, I’m also going to be making silent updates to my existing 747-400 series. Those of you who have purchased any 747-400 template from my online store will be notified automatically once they have been updated. And of course, you’ll get those updates for free. 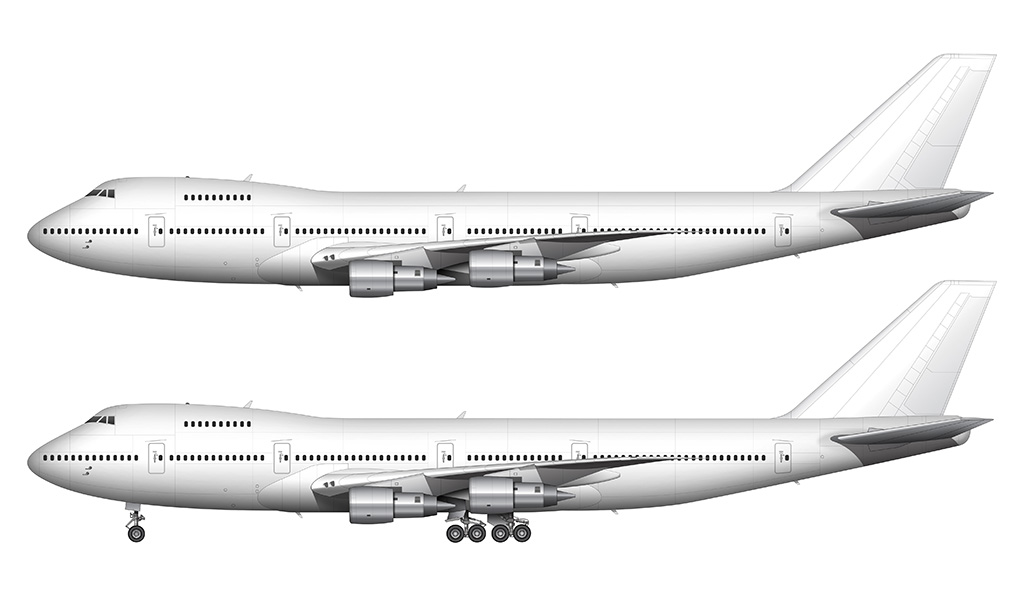