I didn’t realize it before, but I think that the smaller turboprop aircraft such as this Dash 8 are actually more difficult for me to illustrate than the larger airliners that I normally do. The problem is that these turboprops are a lot smaller, which requires me to zoom in and fill the page a bit more than I would normally would when drawing larger aircraft. My source files for these airliner templates are large format (5000 x 3000 pixels), so making a little airplane fit a canvas that large requires some extra work to make sure that I include all the important little details.

On the flipside, its important to maintain consistency with my other airliner templates. I could easily spend an entire year on a single illustration if I was completely obsessed with including every single little rivet and connection bolt, but these templates were never meant to be used as construction drawings anyway. Because of that, it’s important for me to know when to say when in regards to adding extra detail which I don’t include in any of my other illustrations. It took me a while to figure out what detail I was going to and not going to include in these Dash 8 templates, but I hope you’ll agree with me that I found a decent middle ground which still makes these drawings valuable for a variety of different uses.

Those of you that have been using my templates for a long time know that I illustrated the Q400 way back in 2015, and the nice thing about that is that this smaller -200 version shares a lot of the same components of that larger -400. Unfortunately the Q400 is a lot newer and much more modern than the Dash 8, so I had to modify nearly every one of those components before adding them in. But as I’ve said before, I never would’ve known about these differences if I wasn’t doing these illustrations, so I enjoy doing the research and figuring out the differences between all the sub types. 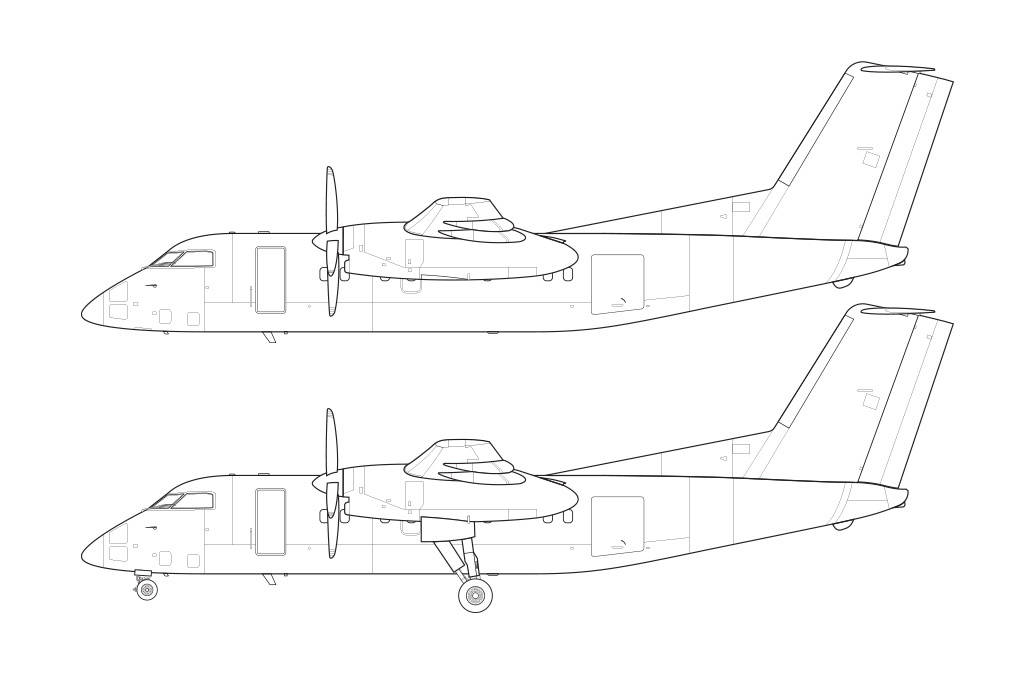 Speaking of sub types, I learned that there are incredible number of different variations of the De Havilland Dash 8. Basically, there are four main versions: the -100, -200, -300, and -400 – which is more commonly referred to as the Q400. However, within all of those versions are an endless array of sub models which makes the entire lineup sound really confusing and a bit overwhelming. That’s why I felt a twinge of heartburn when, after I had already committed to illustrating the Dash 8, I realized that this is a very convoluted aircraft lineup and simply doing one illustration isn’t going to cover all the bases. Because of that, I simply chose to illustrate the most common variant which seems to be the -200.

To put it in the simplest terms possible, the –200 is a more powerful version of the -100, and the -300 is a slightly stretched version of the -200. The -400 (Q400) is the largest of the Q Series family of aircraft. And if you were curious to know about all of the variations of each of these, I’d recommend checking out Wikipedia for the full scoop. There are simply too many to list here!

Finally, I’d like to take this opportunity to thank all of you who have sent me links to the projects you are working on. I love seeing how you are all using my templates, and it really amazes me how creative you guys and gals are. One of these days I’m going to put a giant post together here on the blog showcasing some of that work. All of what I have seen so far covers the gamut in terms of the types of projects – some are using my templates for livery designs (personal projects, school projects, virtual airlines, etc.), some are using them for technical product demonstrations, and there are even a few of you out there trying to start an actual airline, using my templates (with your branding) as part of your venture-capital presentations. Amazing!