I’ve been following the airline industry for a very long time. It’s always been entertaining, and if there’s anything that causes drama, it occurs whenever an established airline unveils a redesigned livery. The new Lufthansa livery is a classic example of that.

Officially unveiled to the public in February 2018, Lufthansa’s new look was not well received by the public – even though the logo didn’t change all that much and the typeface of the Lufthansa titles was basically the same.

The uproar was caused by the elimination of the iconic “Lufthansa yellow.” It was official. For the first time in decades, yellow was no longer part of the official Lufthansa livery.

A brief overview of the new Lufthansa livery

One of the most interesting things about this rebranding was the fact that it was done entirely in-house. That’s rare these days, as most airlines find it more economical to outsource their livery design. After all, they don’t need to do it very often, and there’s not no sense in having a team of people on staff who can do this sort of thing. 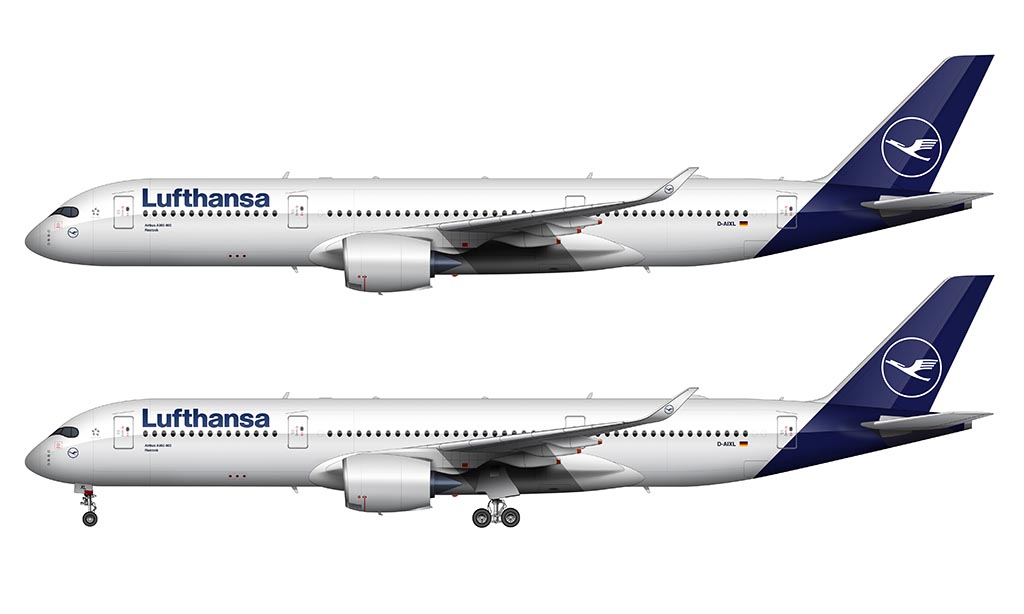 Lufthansa’s beautiful new brand colors as shown on my Airbus A350-900 template.

I have a lot of respect for the Lufthansa marketing group. Even though they aren’t “expert” livery designers, they know their brand better than anyone else. Why let someone else tell them what they should do? Anyway, they rolled up their sleeves and got it done. And in my opinion, they got it done very well.

Did you know that they even painted the wings white? I didn’t even notice it at first. However, every time that I look at a Lufthansa aircraft wearing this new livery, it’s the first thing that I look at. It’s beautiful! 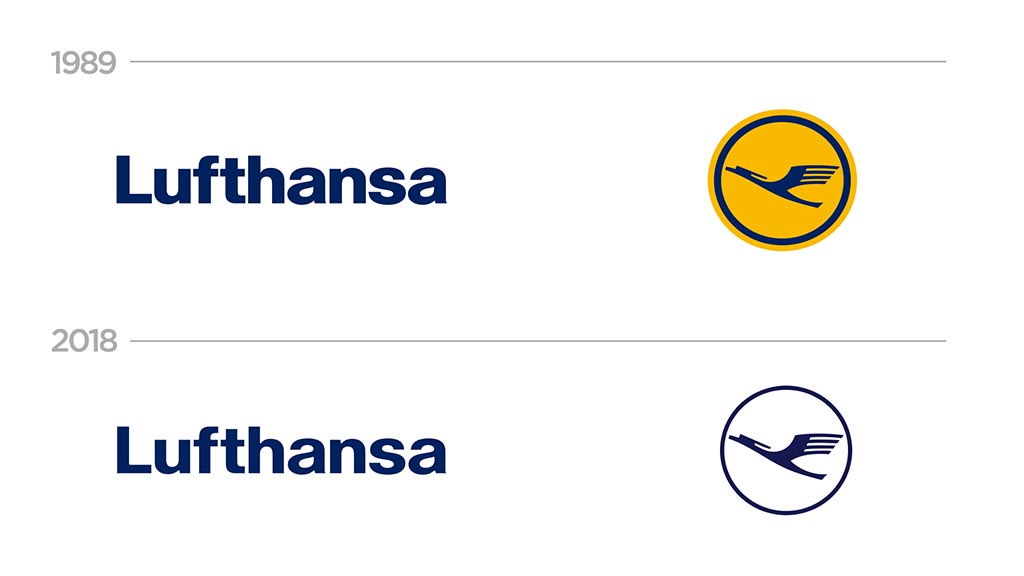 A comparison of the old and new Lufthansa brand elements. RIP yellow!

The design process for the new livery

By keeping the design process in-house, Lufthansa was able to experiment in ways that many other branding agencies wouldn’t have been able to. This experimentation helped them of course, but it also caused problems as well.

Everything that went right

Thanks to their vast amount of resources, Lufthansa was able to experiment by applying different design concepts to parts of actual aircraft. The designer in me can’t help to want to give them a virtual fist bump for that, because – that’s thinking outside the box.

More specifically, they used the vertical stabilizer of an old 737 to test out 15 different shades of blue that they were thinking about for their primary brand color. I doubt there are many marketing and branding agencies out there who have the ability to do the same whenever they’re creating concepts for a new airline livery.

Everything that went wrong

Even though they were going the extra mile by actually applying design concepts to components of actual aircraft, they forgot one thing: all of the tests were being conducted indoors under controlled lighting. In other words, they didn’t test these design concepts in a wide variety different lighting conditions.

In Lufthansa’s defense, I’m sure that they rolled that vertical stabilizer outside a time or two just to have a look. All I’m saying is that they didn’t do it as often as they should have. This shortsightedness came back to haunt them a short time later.

Ta-da! Why the first version of Lufthansa’s new livery was an utter failure…

In August 2018, Lufthansa admitted that they made a mistake. The blue that they chose for their primary brand color was so dark that it looked black in certain (mostly overcast) lighting conditions. 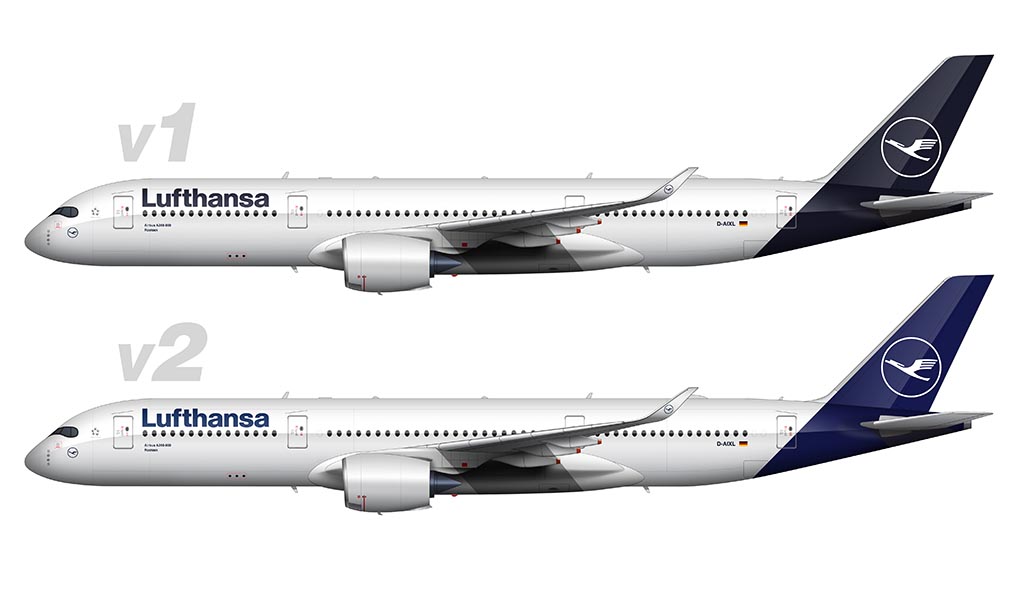 The first version of the LH new livery (top) featured a blue color that almost looked black. They rectified it with a second version (bottom) a short time later.

The kicker about all this was that it wasn’t discovered until they had painted several aircraft. Once they (and everyone else) saw these aircraft in real world lighting conditions, it quickly became clear that they didn’t do enough testing in different types of light.

For the record, I actually quite liked the look of a “black” Lufthansa livery. However, since blue is such a critical component of their overall brand, that wasn’t going to work.

The airline ultimately corrected this mistake by creating a new shade of blue that actually looked blue in all lighting conditions.

How does this new livery compare to the previous version?

Remember what I said earlier about new airline liveries causing so much drama in the aviation community? Over on airliners.net, things got so crazy when the new Lufthansa livery was revealed that I swear I thought the world was going to end.

Despite what much of the world thought, I actually quite liked it. It was clean, classy, and a nice evolution of the previous design. 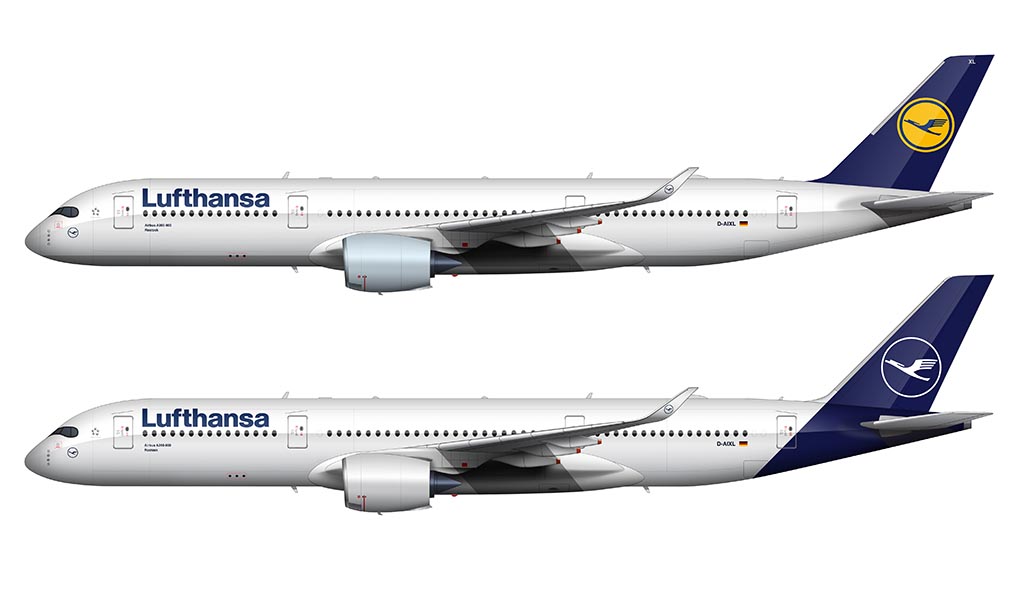 Here’s what the new livery looks like compared to the old one. Which do you like better?

It is somewhat unfortunate that they couldn’t find a way to get the yellow within the design, but I still think that it looks pretty sharp.

Then again, I like simple color schemes. Most people see monochromatic things as being “bland” or “unfinished” if they don’t contain any bright colors. I disagree, and once again, I offer a virtual fist bump to the team over at Lufthansa who created this new (somewhat monochromatic) livery.

What makes this version of the Lufthansa livery so great?

It’s the simplicity. Yes, the fuselage is mostly white. However, they accentuated that by painting the wings white as well, which adds a nice touch of class to an otherwise simplistic design.

The crane logo and Lufthansa titles at the forward section of the fuselage balance each other out quite well. Mix all that in with the dark blue cutting a hard line from the tail cone to the vertical stabilizer, and you’ve got a very classy design solution.

Here’s a video that I created which explains all the things that makes this new Lufthansa paint scheme so nice:

I personally don’t feel as if the haters have given this livery the attention it deserves. There’s a lot that goes into the process of creating an entirely new brand for an airline, and most of the people who are saying negative things about this livery can’t fully appreciate what went into it. Lufthansa‘s legacy played a major part in the way that it looks.

The full color palette of the new Lufthansa’s new livery

Even though I haven’t seen official documentation from Lufthansa in regards to the new color palette, that didn’t stop me from doing a bit of investigation of my own.

From what I’ve been able to determine from their official marketing materials, this is the official color palette for Lufthansa after the 2018 brand refresh:

As you can see, yellow is still very much a part of the official Lufthansa brand language. I don’t think it’ll ever go away. Also, even though gray doesn’t seem to be an official part of their new color palette, I’m seeing them use it occasionally as an accent color in marketing materials.

The color palette of the updated Lufthansa livery as it applies to the aircraft itself. I say again: RIP yellow.

What do you think? Did Lufthansa totally botch the redesign? Should they have engaged a reputable airline branding agency to do this for them? I want to know your thoughts, so do be sure to leave them down in the comment section below…