Do you even know how guilty I feel about creating airline livery illustrations when I’m already so deeply backed up on all the side view templates I’ve been promising? I was actually planning (and hoping with all my might) that I’d have my Dornier 328 template created and posted by now, but I’ve been so busy with a lot of other projects and I haven’t had a lot of time for it yet. The good news is that it is in progress, and everything is coming along nicely so far. The bad news is that it’s not going to be finished until after the holidays. Sorry about that.

And do you remember back in May of this year when I promised that I was going to start posting more airliner art in addition to my side view templates? I was as proud as a peacock posting that American Airlines 757-200 rendering with the promise that it would be the first of many from that point forward. I even followed it up a week later with some sparkly Alaska Airlines 737-900 renderings. I was on a roll!

But then, I strayed off track. My intentions were good, I swear, but the demands of cranking out the templates and working on my SANspotter brand simultaneously caused me to put the livery renderings on hold and I feel terrible for it. I mean, how can I call myself a legitimate airline nerd if I can’t even find the time to have a little fun and crank out some juicy renderings every now and then? That’s where this post comes in, because I’m feeling like I need to post full renderings more often.

This Air Transat A330-343 wearing the 2011 “Welcome” livery was one that I illustrated for my SANspotter brand just last week, and it ended up being really fun to recreate. The livery itself is really simple, featuring the word “welcome” written in nine languages at the aft section of the fuselage (English, Italian, Turkish, Greek, French, Spanish, Dutch, German, and Portuguese). It may look really complicated and busy at first glance, but it’s actually very well organized with everything written in the same “Gotham” typeface. 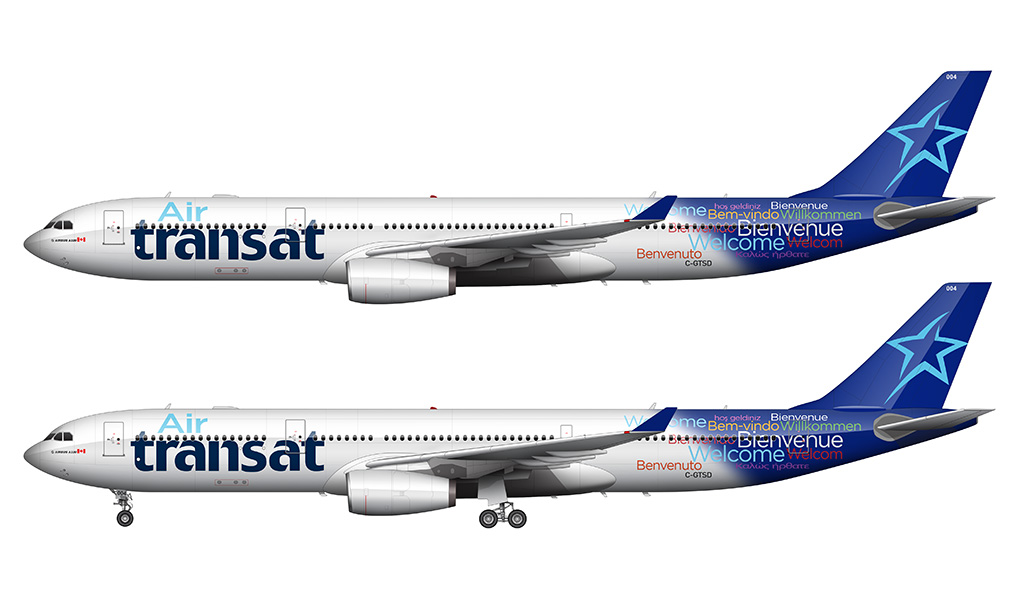 I’m not much of a fan of how the blue gradient ends so abruptly as it moves forward on the fuselage, but with the text overlay, it’s hardly even noticeable. And besides, the bold stacked “Air Transat” titles at the forward section is another nice-looking element which takes attention off that odd gradient line.

Using eye catching and bold elements to hide “weak” areas in a design is more common than you might think, and there’s nothing wrong with it. As a matter of fact it’s something that most designers do when taking design input from so many sources and not everyone can agree on the same things. It’s the most frustrating part of doing design work actually.

Anyway, once again, I’m promising to make the effort to post more airline livery illustrations from this point forward. Most of you know that I spent 20 years working as a visual designer in some very large companies here in the US, and I love everything about illustration and design. Especially when it comes to the airline industry! Yeah, creating all white (and line drawing) side view templates is fun, but it doesn’t quite scratch the itch I have to be all artsy and designerly in my day to day life.

Another reason for wanting to post more of these renderings is to showcase what’s possible with my side view templates – and to inspire others to do the same. The entire reason for me getting started with this back in 2012 or so was because I was inspired by other talented aviation artists doing the same thing, and if I can dish out a little inspiration of my own, I’ll be a really happy guy.

Apologies once again to those of you patiently waiting for the Dornier 328 templates. It’ll be my first priority to get those wrapped up immediately after the holidays!