Does anybody know how I could apply for a position on the Airbus Board of Directors? You see, I’ve got a lot of opinions about the A330 NEO (both good and bad) and I’d love to sit down and chat with the people who made the decision to go ahead with this next-generation variant of the A330. I’d also like to offer a few suggestions as well, and I know that the only way that anybody at Airbus would ever listen to me is if I had a seat on the board. Hold on a second while I check Craigslist to see if there’s an opening…

My biggest issue with the A330 NEO is how much overlap there is with the A350, and I can’t help but to wonder if Airbus is competing against itself and driving customers away from the more expensive aircraft (one that I assume has higher profit margins). But then again, my assumptions could be totally off base and perhaps it’s the A330 NEO that generates more revenue?

But what about all the development costs that went into revamping this old airframe? It couldn’t have been cheap, and I’m still scratching my head as to why they would spend all that effort and money putting lipstick on a pig when they could’ve used those resources to drive more sales to the A350.

The A330-900 NEO is basically an A330-300 with larger Rolls Royce Trent 7000 engines and A350-style blended winglets. The cockpit windows are all new as well, and are very similar to what’s on the A350 – black bandit paint included (which looks totally cool by the way). These changes were significant enough to make the creation of this template very time-consuming, and in order to get the blended winglet looking correct I basically had to re-draw the entire wing. And as I’ve mentioned before, the wings are the most complicated part of any of my templates. The rest cake. 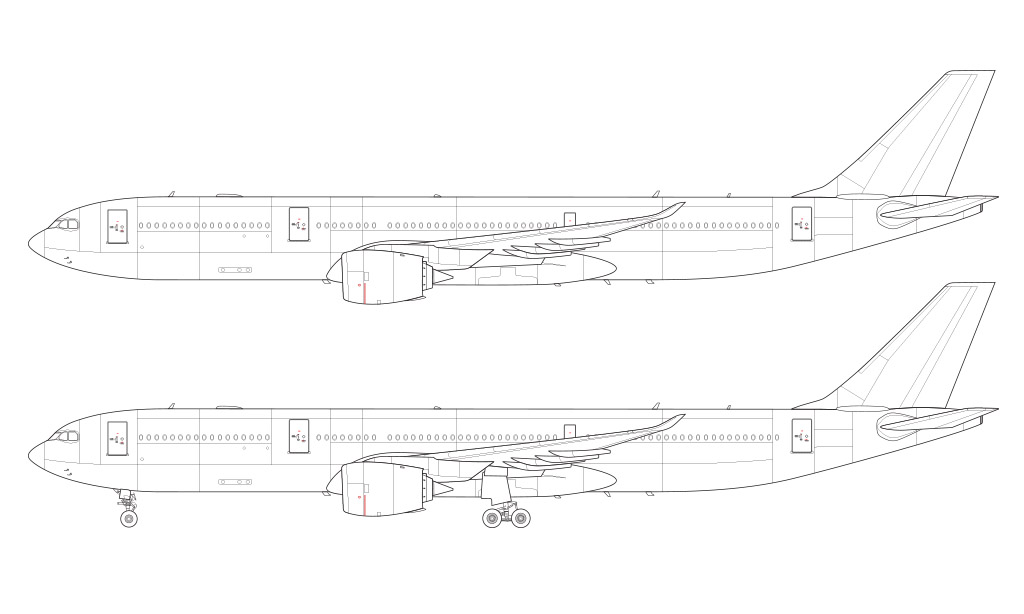 Technical side profile line drawing of an Airbus A330-900 NEO

Speaking of the Rolls Royce Trent 7000, all I can say to that is: wow! The A330 never really looked right to me from any angle, but this huge new engine gives the aircraft a completely different look and it’s really impressive to see the size comparison of this engine compared to some of the older variants. I’m still not sure what I think about the blended winglet, but this new engine is enough for me to consider the A330 NEO to be one of the best looking commercial airplanes available at the moment.

Despite my reasoning to question the existence of the A330 NEO, it seems as if Airbus has a hit on their hands and they made the right decision to go forward with the program. A quick check of Wikipedia reveals that there are 214 confirmed orders for the -900 at the time of this writing, which is very respectable and solid proof that it’s a viable product that the airlines want. Malaysia Airlines is leading the demand at the moment with 66 firm orders. Delta and Iran Air are number two and three, but each of them are way back with roughly 25(ish) orders each. Oh – and a quick check of the A350 reveals that there are 847 confirmed orders at the time of this writing, which is impressive, but I would bet that number would be much higher if the A330 NEO didn’t exist.

Do I even have to tell you what my next template is going to be? Most of you should be able to figure it out without any hints from me, but I’ll say it anyway. It’s the A330-800 NEO! Yes, I know that Airbus has exactly 0 orders for that variant so far, but I’m going to template it anyway just so that I can have it as part of the full collection. It’ll be posted in just a few days!