Well, you can chalk this one up into the “I thought it was going to be easy but it wasn’t” category. The current QANTAS livery is quite decieving, primarily because the main titles are in a typeface I can’t find, and the kangaroo was not so easy to replicate by hand. Other than that, it’s just a simple 2-color airline livery! Jeez, I spent much to long on this one and I am glad to be finsished with it. Recreating much of this livery by hand was not an easy task.

But overall, I’m really happy with the way it turned out. I’ve got a soft spot in my heart for QANTAS (they took me to Australia for my first long haul flight back in 1999), so that made it easier to keep plowing forward with this illustration when things got tough. 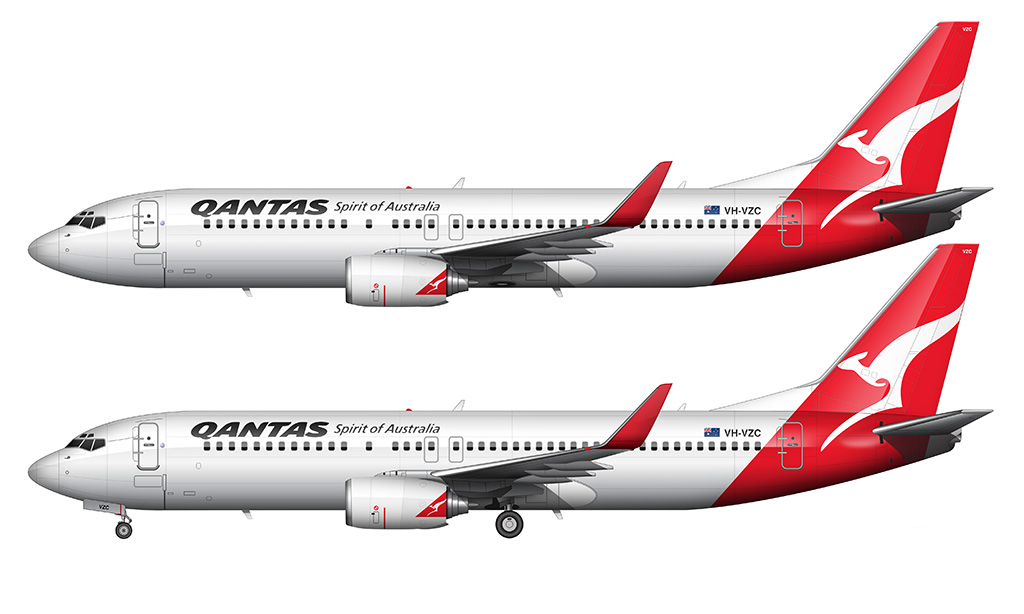 Here’s the same illustration over a plain white background

But I understand why they did that, as this isn’t an issue on other aircraft types (due to the shapes of the vertical stabilizers). It’s just one of the sacrifices that need to be made when it’s impossible to come up with one solution that works for all scenarios.

Other than that, this is a sharp livery. I’m not a big fan of prominently white aircraft, but the strong colors and stylized kangaroo logo make it very appealing to me. Now I’m getting inspired to create a 747-400 illustration and put this livery on that. There’s just something not quite right about seeing the Qantas color scheme on a small aircraft like the 737-800. In my mind, the QANTAS brand is all about international long-haul (and large aircraft).